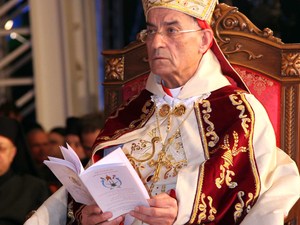 The trip of Maronite Patriarch Beshara al-Rahi to the U.S. will be limited to a visit to the Lebanese community there after the prelate held onto his stances made in France, Ad-Diyar daily reported Sunday.

The newspaper said that al-Rahi will not meet with top U.S. officials in Washington after he told U.S. Ambassador Maura Connelly that he held onto his remarks on Hizbullah’s arms and the situation in Syria.

Connelly reportedly told the patriarch that he needed to provide explanations on his statements before setting dates with U.S President Barack Obama and other officials.

But al-Rahi snapped back by cancelling his visit to Washington. The patriarch might visit New York for talks with U.N. chief Ban Ki-moon, Ad-Diyar said.

Al-Rahi has linked the fate of Hizbullah’s arms to the withdrawal of Israel from the remaining occupied Lebanese territories. He has also expressed fears on the rise of the Muslim Brotherhood to power in Syria saying President Bashar Assad should be given the chance to introduce reform.

Ad-Diyar’s report came after a Western diplomatic source told Naharnet that the U.S. administration believes it is al-Rahi’s right to express the concerns and aspirations of his community during this period.

“But it is looking forward to understanding his vision and the vision of those he represents with regard to addressing these concerns on the basis of a future perspective and common vision with all those concerned domestically and internationally about helping the peoples of the region to achieve freedom, democracy, stability and prosperity,” the source clarified.

“According to this approach, the U.S. administration welcomes what it believes will be a primarily pastoral visit Patriarch al-Rahi will make to the Maronites in the U.S., and welcomes a constructive dialogue on how the Christian community can move forward in supporting the aspirations of the peoples of the region,” the diplomat added.

Asked if al-Rahi may meet with high-ranking U.S. officials such as Obama or Secretary of State Hillary Clinton, the source replied: “The United States looks forward to constructive dialogue with the Patriarch.”

Good.
I would suggest he goes instead to iran and staythere, if he can live there.

Geha is back with his jokes

US blind support to Israel and Turkey are to blame, the Turkish invasion to Cyprus and Israeli occupation to Lebanese land including air space violation.
The hard work of the Lebanese army and UN forces has secured the borders more than many streets in Jerusalim, Baltimore and London.US born chldren from Lebanese christians have been deported from US in violation to the US constitiution and more anti-Lebanese policy world wide as a result of this middle turm oil, Lebanese and Lebanon havepaid a heavy price for this front line religious conflict over power.

Rahi is on the wrong side of history,.. putting his fate in the hands of a collapsing Shiite militia...

Very well done your Beatitude - They ( the US ) dont deserve your visit , no need to talk to liars that are on the Saudi pay roll , that have a job to deliver to the al Saud family , the islamisation of Lebanon , Syria and the M.E .

Poor americans Christians , giving the priority to their interests , and putting aside their roots their believing end their traditions , will lead them in less than 25 years , to an Islamic Salafi Wahaby state ... like what is happening today , in France and Europe .

It is fair to say that Rahi is the fourth Useful Idiot on the Lebanese scene. Supporting any tyrant in the Middle-East for short-term political benefit is a kiss of death for Christian survivability in the region. Not to mention that the prosperity and dignity of Lebanese Christians and all minorities are intimately linked to freedom, rule of laws, sovereignty, accountability and transparent democracy. Rahi seems to be mesmerized by media exposure and would say anything to be in spotlight. In his short reign in Bkerke he has managed to directly or indirectly support tyrants, justify HizbIran rockets, insult moderate Sunnis who truly believe in partnership with Christians, and praise Aoun (Khadafi's twin brother). Rahi should remember that first century Christians were thrown to the lions just for refusing to hail the Roman Emperor. The Church should replace Rahi before the damage he causes to Christians will be irreparable.

My dear friends, since when did the West -in modern history- look elswhere than fulfilling its own interests that lie in Israel and the oil-rich Gulf states? Does anyone really believes that Western countries (whether Europe or USA) ever achived "democracy, stability and prosperity"? They always left diasaters, ethnic/religious divisions, dismantled countries and poverty.
Wake-up and understand that it's only through unity that we can overcome these dark times.
As for Partiarch Rahi, it's surely better that he doesn't meet the guys from Washington who are biased anyway!

to GB:
unity is a must, but not with extremists who have an external agenda to transform our country into something else.
for those of you who still think this is doable, I dare you to go and live in the ghetoes controlled by hizbullah, just for one week.
please stop fooling yourselves, and realize this battle is for our country, our Lebanon, the way we like it.
this patriarch does not have balls, unfortunately: the moment the Syrian regime threatened to kill christians in syria, he caved in. how can any lebanese accept to live under threats of this sort?
we are a free people, and the threat of weapons does not frighten us.

the Patrak must have some notions as to the way things are moving in the Arab world as well as the western world. His moves from the time he assumed his new position till now has been rather steady and unambiqious. He does support the Syrian regime and their subsidiaries (Hizbullah) in Lebanon. He chose a path object to the one chosen by his predecessor and is forging his way through a fulfledged support of Huzbullah. As a person, I do respect the Patrak's stance even though I disagree with him on it. he could know things that we are oblivious of. Add to that, the Americans had been all talks and no actions since the crisis in Lebanon started. They left harriri high and dry when he desperately needed them. When Jumblat was with Mar 14 he alluded to the verbosity of the American whom he accused as being like an empty drum without real substance. Playing tough with them might be better and could be that the Patrak learned from experience. Let's see where he would take us.

Finally, we have a Patriarch who knows how to spell USA: United States of Affkoles, if you know what I mean.

Its strange how Al-Rahi changed his views 180 degrees after becoming patriarche he was openly against illegal hizbullah arms...probably something behind the scenes happened in the dark (I mean on the moukhabarat level) with him and there's a rumour going on that syrian and hizbullah secret services have caught him doing something illegal which could not be said here in this forum due to the respect for the position he's occupying, in brief they are threatening him with that thing he did before he was elected and asking him to take such positions or otherwise....
one should never underestimate the secret services factor in politics !!!

who would go there, they have full body scanners and pat downs on airports.

I nominate the Patriarch to be the next President of Lebanon.

Connelly reportedly told the patriarch that he needed to provide explanations on his statements before setting dates with U.S President Barack Obama and other officials.
+++++++++++++++++++++++++++++++++++++++++++++++++
Explanations!! no one noticed that!!!
Dear Patriarch Al Rahi your refusal to fulfill the American agenda on the expense of your compatriot in unprecedented ....Your defiance is hindering foreign intervention…..Like i said earlier Mr Al Arhi is the Patriarch of all the Lebanese.....
MrBrain

his speech is very superficial and empty comparing to his predecessor Sfeir who was very deep and full of wisdom... I think Al Rahy is of the same caliber of that priest who always show on TV doing shows and theater , he has none of the qualities of a patriarche!!