Lebanese in North Lose Source of Income Over Syria Crisis 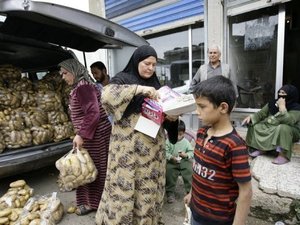 The Buqayaa smugglers' market on Lebanon's border with Syria, once a hive of shoppers, has become a ghost street since the uprising there, with most shops closed and not a customer in sight.

The once flourishing smuggling operations that supplied the souk have all but halted as Syria boosts security at the border as part of its crackdown on more than six months of anti-regime protests, in which thousands of Syrians have fled violence at home to seek refuge in Lebanon.

"Before the Syrian revolution began this was the busiest souk in all of northern Lebanon and maybe even the whole country," said merchant Rateb al-Ali.

"Buqayaa was a beehive of business between Lebanon and Syria," added the 40-year-old. "But that's not the case anymore."

Located by the illegal Buqayaa border crossing on the Kabir River separating Lebanon from Syria, the market of around 4,000 shops selling everything from women's accessories to spare car parts and fuel was once called the "golden souk."

Most goods were smuggled from Syria into north Lebanon's Akkar area, an impoverished mountain region famed for its scenic natural beauty.

Illegal crossings between Lebanon and Syria have long been a vital lifeline for the Lebanese of northern regions such as Wadi Khaled in Akkar, most making a living off cross-border "trade."

Cross-border merchants -- or smugglers -- have for years carried goods like soap and shampoo from Lebanon to sell in Syria daily, bringing back food staples and cigarettes.

Seated in the garden of his three-storey home, Ali explained that the uprising in Syria had stripped many residents of Wadi Khaled of their livelihood.

"Authorities on either side of the border have long known that goods go in and out of Lebanon without passing through customs," said the sharply dressed father of four.

"But business today is down 90 percent. Many people in our towns have lost their source of income."

Outside his shop, Mohammed Hamadeh swatted flies while patiently waiting for a customer.

His kiosk, stocked with chocolates, fruit juice and cigarettes, once generated enough income to provide for his 13 children, but today he is lucky if he makes three dollars by sunset.

"Around 2,000 Syrian laborers used to cross the Kabir to work in Lebanon every day, and they'd stop by my shop to buy a cup of coffee or some refreshments," said the 40-year-old.

"Now, if it's a good day, a neighbor or relative will come buy a bottle of water."

Across the river from Hamadeh's shop, Syrian soldiers patrol the border, eyeing the crossing for any activity.

"Syrian laborers used to cross the river all the time to come work here," Hamadeh said. "Today no one dares cross because they're afraid they'll get shot."

The United Nations estimates close to 3,800 Syrians fled into Lebanon since the protests against President Bashar al-Assad broke out in March.

More than 2,600 people, mostly civilians, have been killed in the conflict, according to the U.N.

Movement at official crossings in north Lebanon has also slowed in recent days, amid unconfirmed reports Syrian troops are combing the border for anyone trying to leave the crisis-hit country.

"Currency exchange here at the border has dropped 80 percent since the Syrian revolution began," said Amer, who runs an exchange service near the official Arida crossing point, a stone's throw from the souk.

It is not just businessmen who are suffering: residents of Wadi Khaled who can no longer cross into Syria for their food shopping are now struggling to meet rising prices in Lebanon.

"Consumer goods in Syria are significantly cheaper than Lebanon," said Ali Ramadan, mayor of the border village of Mashta Hammoud.

"A butane gas cylinder for a household cooker sells for 15 dollars in Lebanon but would cost no more than eight dollars in Tal Kalakh," he added of the Syrian border town where protests have been met with deadly fire.

Many Syrians have left their homes in Syrian border towns like Tal Kalakh and Heet and resettled in abandoned schools rehabilitated by the U.N. refugee agency (UNHCR) or with relatives in north Lebanon -- relatives who themselves are now struggling to get by.

"People from towns on either side of the border are inter-married, so family has helped family during this time of crisis in Syria," Ramadan said.

"They are sharing everything they own. Unfortunately, in light of rampant unemployment and the decline in trade here, there is not much to share."