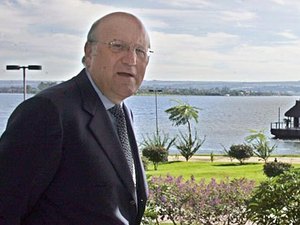 Lebanon’s interest lies in “respecting U.N. resolutions and avoiding selectivity in their implementation,” Premier Najib Miqati said in New York, where he arrived Sunday for a several-day visit during which he would chair Security Council meetings and hold talks with top U.N. officials, including Secretary-General Ban Ki-moon.

“We must regard Lebanon’s interest as a priority and I don’t believe that any faithful Lebanese can be against their country’s interest,” Miqati added, when asked by reporters about the U.N.-backed Special Tribunal for Lebanon.

Lebanon holds the rotating presidency of the Security Council for the month of September and Miqati will chair the sessions on Tuesday where he is expected to address the current developments in the region.

Miqati is scheduled to meet with Ban and heads of delegations participating in the 66th General Assembly meeting. His talks begin at around noon New York time.

The premier stressed in New York that he is seeking to “protect Lebanon and strengthen its position and role in the international arena, in addition to fortifying its domestic front and addressing all local issues in a calm manner.”

Asked about the controversy on the Special Tribunal for Lebanon, the premier said: “Lebanon’s interest lies in the respect for international resolutions and non-selectivity in their implementation.”

“It’s better for us not to talk about the court so that we don’t engage in a useless debate,” he said, adding that he would try to “convince all sides not to be selective in dealing with the international resolutions.”

Speaking to Lebanese reporters accompanying him on his trip to the U.N., Miqati said “we have no choice but to maintain excellent relations with all countries in the world, except the Israeli enemy of course, and our priority is domestic unity.”

Answering a question, Miqati said his talks with U.S. Secretary of State Hillary Clinton would tackle several issues, “including support for the Lebanese army and security forces.”

no worry. netanyahu knows miqati is patriotic lebanese, and he says such things only for those who want to hear it.