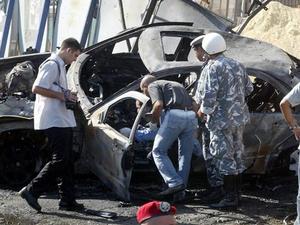 MP Marwan Hamadeh resumed on Monday his testimony before the Special Tribunal for Lebanon by recounting the developments in the country following the extension of President Emile Lahoud's term and detailing the assassination attempt against him in October 2004.

He said before the Trial Chamber: “A brief investigation was launched in my assassination attempt before Syrian officials took away the files and transported them to the headquarters of Syrian intelligence in Anjar.”

“Then Interior Minister Elias al-Murr can attest to my claims,” he declared before the court.

“Head of Syrian Intelligence in Lebanon Rustom Ghazaleh had reportedly said of my assassination attempt that either Israel was behind it or that I had done it to myself,” he added.

Hamadeh had kicked off the testimony by describing the role of the fledgling opposition in Lebanon against Syrian influence that led to the formation of the Bristol gathering.

Its members held regular meetings that tackled ways to confront Syria's growing power in the wake of the extension of Lahoud's term on September 3, 2004.

“Hariri was hoping that a moderate national unity cabinet would help sway the power balance in Lebanon's favor against Syria,” said Hamadeh,

He revealed that a deal was proposed to the premier where his bloc would vote for the parliamentary amendment, which would lead to the extension, in exchange for allowing him to form a cabinet.

Hariri was making efforts to form this cabinet, explained the MP, but Syrian officials kept hindering his attempts and opposing names of potential ministers.

The MP said that he and Progressive Socialist Party leader MP Walid Jumblat had repeatedly urged the premier to resign and leave Lebanon due to security dangers and pressure exerted by Syria against him.

The Syrian obstacles and media stories that suggested that his cabinet lineup would be rejected forced Hariri to resign in October, he continued.

“He was informed on October 20, 2004 that forming a cabinet was no longer viable and that he must resign,” added Hamadeh.

“Hariri submitted his resignation to Lahoud and later issued a statement that was interpreted as a farewell to Lebanon,” commented the lawmaker.

The testimony then moved to the assassination attempt against Hamadeh on October 1, 2004.

He said that a roadside bomb attack targeted his vehicle shortly after he left his Beirut residence for parliament.

“My companion was immediately killed, while my driver and I were severely wounded,” he remarked.

He explained that he was not riding in an armored car and did not take security precautions, “because it had never occurred to us that an assassination would take place.”

“The attempt against my life was aimed at killing me and also served as a message to Hariri and Jumblat,” he said.

A day before Hariri's assassination on February 14, 2005, the MP revealed that he discussed, during a Bristol Gathering meeting, threats against the former premier.

“Hariri took the threats against him seriously, but not seriously enough. He believed that they would not dare kill him and that he was probably immune to an assassination because of his high standing,” he remarked.

Asked about the investigation in his murder attempt, Hamadeh recalled: “The only investigation in my attack was limited to a policeman taking my statement, in a meeting that did not last more than five minutes.”

The real investigation started with the arrival of United Nations investigator Peter Fitzgerald to Lebanon to tackle Hariri's assassination in February 2005.

The STL Defense then objected to the extensive discussion of the attempt against Hamadeh's life, saying it is not the main issue at hand.

“Murr informed me that the files on my assassination attempt were stolen ten days after the attack,” he revealed.

“Police chief of the Internal Security Forces at the time Marwan al-Zein informed me that Ghazaleh had told him that Israel was behind the attack or that I had done it myself,” he continued.

Hamadeh noted: “Ghazaleh was trying to make the ISF disregard the investigation in my assassination attempt.”

Zein was later removed from his post after the formation of PM Omar Karami's government in November 2004 and appointed as Lebanon's ambassador to Saudi Arabia, said the MP.

“Following his resignation in October, all of Syria's allies in Lebanon launched a campaign against Hariri and a large number of his state-appointed security entourage was removed,” remarked Hamadeh.

“The campaign against Hariri started in parallel with all the contradictions in Syria's manner towards him in 2003 and reached its peak in 2004 and 2005,” he explained.

“The campaign became so stifling that days before his assassination pro-Syrian officials even criticized him for purchasing oil to distribute to the poor,” the lawmaker noted.

“Syrian pressure against Hariri was aimed at deterring him from running in the elections or at least forcing him to ally himself with pro-Syrian figures,” he stated.

“Despite all of the pressure and threats against him, Hariri maintained his calm. He was looking forward to the 2005 parliamentary elections in order to thwart Syria's ambitions in Lebanon,” he recounted.

“Hariri had repeatedly told me during that period that we will be victorious in the elections regardless of what law is adopted,” Hamadeh said of parliamentary sessions in February 2005 that were tackling the issue of the electoral law.

Commenting on United Nations Security Council resolution 1559, Hamadeh stated: “Syrian officials had always accused Hariri of leaning towards the West and being behind the resolution.”

U.N. Special Envoy for the implementation of Security Council Resolution 1559 Terje Roed-Larsen had met with Syrian President Bashar Assad three days prior to Hariri's assassination and he explained that he was “very angry” with the slain premier, revealed Hamadeh to the court.

“The year 2000 was a critical for in Lebanese-Syrian ties. It witnessed the withdrawal of Israel from the South, but maintained its occupation of the Shebaa Farms, whose identity is disputed between Lebanon and Syria,” he explained.

“The dispute over the identity of the Farms is at the heart of the ongoing armament of Hizbullah. Had this issue been resolved, the party would not have had its excuse to maintain its weapons,” he said.

The STL session will resume hearing the testimony of Hamadeh on Tuesday.

It is also expected to make a ruling over the possibility of summoning Jumblat to make his testimony as a witness before the court, announced presiding Judge David Re.

Emile Lahoud too should be dragged to the courts, he was the one that ordered that the crime be be heavily tampered with.

Lahoud will deny everything. Any question that starts with "Where were you..." he will answer "swimming..."

@Khallas, you're absolutely right, this man just like all his bosses and co-partners will continue to deny, but also, they do know for sure that the people, the experts and the tribunal know well of his role to seriously tamper with the evidence of the crime scene. Frangieh who was a minister at the time was even suggesting that it was an air attack by Israel. Many of the vehicles were taken to the 7beych Police station. Much of the crucial evidence was tampered during the first 24 hours after Hariri was assassinated, so indeed, a person like Lahoud should be indicted for his crimes including all those who directed him, supported him and gave false evidence in this heinous crime.

FT, it's not by replying the way you did that you would defray from the conversation. Lahoud is guilty of a major crime and no amount of wiggling by you could change that. If Lahoud had a clear conscience, why did he attempt to dissimulate evidence that is so crucial at finding the killers of Hariri? Please man, let's stick to the thread, if and when the issue pertains to Geagea, surely we would discuss that as well.

@FT, strange that you have no issue forgiving the syrian regime but not Geagea nor the FL.

Lahoud is one if the greatest traitors.

and allowing Orangina to come back...

Straight question ya flame, who do you think killed hariri?

sure aoun can give his opinion but when others do the same they are village idiots... then i guess your aoun is a village idiot that you follow blindly as you are way more idiot than him! LOL

The caporal when in France used to say almost everyday :"Lahoud must be brought to court for high treason".
where is the caporal today?

Flamey stfu this is about the Hariri assassination. Emile Lahoud is an accomplice to the crimes committed by the Syrians. He should be called to testify

Sure Flamey... just a question: who killed all the anti-Syria figures after we kicked them out? You don't know? You need a lot of proof to decisively answer??

When your idol was in France he even accused Syria of being behind it. He even called Hezbollah terrorists, remember that? But now after he allied with them they're a resistance and Fatah al-Islam killed Hariri. Right... and let me ask another question: have we heard any evidence pointing to Fatah al-Islam or anyone other than Syria and Hezbollah?

While we have takfiris swarming towards Lebanon, we do still have the ignorant M14, talking about old cases. How about a new case? That case should indict the corrupted politicians in M14, that orders our troops in LAF not to shoot back.

The takfiris swarming towards Lebanon because your HezbCocaine killing women and children's in Syria. Only your filthy party have expiration date for murder investigation.

Glad you proved my point, that M14 are ignorants, the deaths of LAF soldiers, are a clear example, of a takfiri invasion, yes more of them are swarming towards Lebanon, as we speak. Thank goodness we have the Resistance in Syria holding those swarms back with anti-bug spray.

"Thank goodness we have the Resistance in Syria"
Why in Syria's ASSad not in Lebanon? Douche-bag Iranian

First, it is well known that the Syrian (ASSad) authorities maintain responsibility for Lebanon’s security. This is indeed is one of the main pretexts for Syria’s military “presence” in Lebanon. Every Lebanese was aware of Syria’s disgust over al-Hariri’s friendship with president, Chirac. The Syrians blame this relationship for facilitating UN Security Council resolution 1559, which demanded their evacuation from Lebanon and the disarmament of HizCoCaine.

Hello, have you ever noticed that every time this forum starts a meaningful serious debate, suddenly a shadowy entity(I am not sure is a person or a bureau) hijack the debate and derails it.What is interesting in all this is that the serious ones let them get away with it by branching off and falling into their new " debate". I would highly recommend that ignoring them is the best way to shut them off and out. Please do not allow that the logic be suffocated by fanaticism. Thank you

Hijacking is a simple way of life in Lebanon by Kizballah no different are their supporters who still beleive that every mystery from wind direction to the thousands of killings in Lebanon are all an Israeli plan. One would think Israel had nothing so ever to do but work on assasinating Lebanese leaders? if that was true then conversly they saved Syrian and hizballah leaders why?