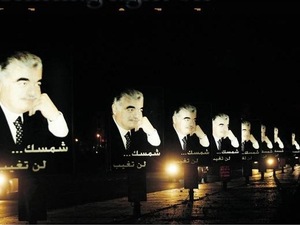 The Special Tribunal for Lebanon's Trial Chamber decided Tuesday to add MP Walid Jumblat and journalist Ali Hamadeh to the Prosecution's list of witnesses in the assassination of ex-Prime Minister Rafik Hariri, amid debate between the Defense and judges over remarks by MP Marwan Hamadeh describing the accused Hizbullah members as “criminals.”

The Trial Chamber assessed that Jumblat and Hamadeh can provide evidence in the case due to their contact with the slain premier before his death.

Some members of the Defense objected to the inclusion, saying that it will hamper the proceedings of the trial, while others did not oppose it.

Presiding Judge David Re however said that the Trial Chamber believes that the inclusion will not impede the trial.

The Prosecution is still compiling the documents linked to summoning Jumblat and Hamadeh.

They will be not be summoned before 2015, said Re.

Jumblat's name was frequently mentioned by MP Marwan Hamadeh while providing his testimony before the court.

The MP then concluded his testimony before the Prosecution, recounting the last day he saw Hariri, minutes before his assassination on February 14, 2005.

Legal Representative of the Victims Peter Haynes then began the questioning of Hamadeh as a victim of an assassination attempt.

He described the details of the attempt against his life on October 1, 2004 and the injuries he sustained.

The Defense however objected to the amount of details Haynes went into in his questioning of the injuries, saying that it detracts from the main case of Hariri's assassination.

Re agreed, urging Haynes to move on to other issues.

Hamadeh then discussed his relationship with the Hariri family before and after the former premier's assassination, as well as life in Lebanon after February 14, 2005.

“Life in Lebanon changed after the attack,” he said.

“The attempt against my life is a minor detail. Our lives turned from a normal one to a worsening hell,” he added.

He then spoke of the political divide that emerged following the March 8 and March 14, 2005 demonstrations, the former in support of Syria and the latter in opposition to it, saying that this division persists to this day.

“Hamadeh described the Accused as criminals and wrongdoers and this designation should not be used,” Korkmaz told the court, referring to a statement made by the lawmaker outside the courtroom.

Told by Judge Re that the defense lawyer should have voiced his objection while Hamadeh was giving his testimony, Korkmaz stressed that it is normal for him to “remind of the presumption of innocence.”

“I totally know that you respect this principle, but my words were addressed to Mr. Hamadeh,” the lawyer told the court.

At that point, Judge Re adjourned the session to hold a discussion among judges regarding Korkmaz's arguments and Hamadeh's alleged remarks.

As the session resumed, Re noted that the Trial Chamber is only interested in “the pieces of evidence that it has received,” noting that the chamber has not so far received any evidence related to statements made by Hamadeh outside the court.

“Your remarks are premature and they do not help the court's procedures,” he told Korkmaz.

“It is inappropriate to make statements that remind the witness of the presumption of innocence or to accuse any party of prematurely convicting the Accused. The thing that can be done is challenging the Prosecution's case and questioning the witnesses,” Re added.

Defending his point of view, Korkmaz responded: “I'm sorry for having started this procedural debate in the presence of the witness, but he has not submitted any evidence against those whom I defending, and it is my duty to say everything that is necessary to protect their rights.”

“I respect the rules of evidence and procedure and there are no legal rules that prohibit me from resorting to a certain method to defend the person I'm defending. If this approach does not suit you, I will withdraw, but I should have the freedom of expression during the hearing,” Korkmaz added, pointing out that lawyers in all courts “have the right to remind of some legal principles that should be respected.”

Judge Re then called on Korkmaz to “ask questions that the witness Hamadeh can answer.”

The lawyer then resumed his cross-examination of Hamadeh and showed him a document listing phone calls made from the MP's mobile phone number in the wake of the 2004 assassination attempt.

“I was not able to use my cellphone in the moments that followed the explosion,” said Hamadeh, noting that the cellphone and all the items that were in the car were “destroyed.”

“I don't remember what happened to the SIM card or whether it was transferred to another device,” he added, in response to questions from Korkmaz.

The lawyer noted that the SIM card “remained operational in the wake of the assassination attempt,” adding that the IMSI number “was only changed after a certain period of time.”

“I did not receive any calls on my number from Oct. 2, 2004 to January 18. We can see the presence of another IMSI number (in Korkmaz's document) but I don't know the identity of the user,” Hamadeh said.

“I was not the user of the phone and I don't know all the numbers mentioned in the document. If you mean to say that I know Mustafa Badreddine, I definitely don't know him,” the MP added.

Judge Re then asked Korkmaz to submit the telecommunications document “in a more clear form” and to add “clarifications,” deciding to designate it as a piece of evidence.

Korkmaz for his part demanded that his document/evidence be titled "The Change in Mr. Hamadeh's IMSI Number."

Im surprised that they have not been labeled with Israeli agents by Kizbs media yet? I am sure that Kizb will refute it followed by their usual irrefutable proof by four dead whitnesss who will say (and sheep beleive) that Israel created all this just so that they can degrade the Lebanese and set on each other lol. Off course as Lebanese we wont let happen as we would not need Israels help to set us of at each others throat...heaven forbid! lol

"Hearsay" seems to be the STL's strongest piece of evidence thus far.

it only confirms what most already suspected of this circus...100'2 of Lebanese money to give them "hearsay" evidence.

"Hearsay" is the bread and butter

That's the Generals opinion & he's entitled to it like everyone else.

But the Lebanese didn;t pay 100's millions of dollars to get "hearsay"
or opinions..

the saudis had old man hariri killed, by a al-nursa agent!
he confessed to the crime
then the march 14th clan talked him changing his mind.
so they could use the killing to get the syrian army out of lebanon.
after the army left lebanon the march 14th blamed the hezbollah
on nothing more than telephone use!!
now its back to syria
in the mean time the lebanese have paid over 80 million to the stl
what a racket!

Roar, the general doesn't have an opinion, he just has a bag full of lies, machinations, fabrications and more lies and so on. Yalla, bedtime, here in Beirut it's 8:07 PM, where you are in down under what time is it?

No I have no idea ...why don't you explain the power of hearsay in a trial that has cost 100's of million....surely your legal expertise will come to the fore here.

LO, said the Aussie Neron, so now the STL too has lost relevance and respect. I rest my case, one man all the way from Australia has spoken. Lol to that.

Lost? when did it have ? If you love it then all I can to you is.

CONGRATULATIONS, may you pay another 300 million to hear Jumblat & Marwan tell some stories ...well worth it, would,t you say?

It is not the issue of Aoun personal opinion....it is the issue that he received orders to say that "he is not sure" (on MTV Bimawdu3yeh)...and followers follow the agent...

You forgot that Aoun is to blame for the "blood moon" this year.

Your one track mind in lock mode is on show for all to see.

Korkmaz: I'm sorry for having started this procedural debate in the presence of the witness, but he has not submitted any evidence against those whom I defending, and it is my duty to say everything that is necessary to protect their rights.

hundreds of millions for nothing but "hearsay".

Most of the evidence roar could be in the stolen files that Marwan Hamade referred to. YES the files stolen by the Syrian adminnistrators over Lebanon. So all the evidence you need is in locked safely in Bachar's vault.

It is not the issue of Aoun personal opinion....it is the issue that he received orders to say that "he is not sure" (on MTV Bimawdu3yeh)...and followers follow the agent...

Please inform the forum how "Aoun's" opinion makes a difference to the STL?

or anyone else for that matter? stick to the article or at least try.

Still awake ya Roar, wow, don't you sleep at all? In Australia it must be quite late, wow, what a passion for your old man Aoun, if he is to keep you that late.

Roar won't answer you Habib, but those points are spot on