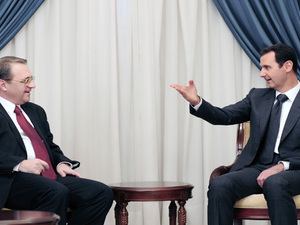 Syrian President Bashar Assad on Wednesday met a top Russian envoy who said Moscow is hoping to relaunch peace talks for the war-torn country and could host a Syria-U.S. meeting.

After meeting Assad, Russian Deputy Foreign Minister Mikhail Bogdanov was quoted as saying, for the first time, that he "was in contact with our American partners."

"If Syrians want to meet in Moscow, then we will discuss this issue with the U.S. side and others," Bogdanov was quoted as saying by the Russian news agency Ria Novosti.

"We have proposed that the Syrians come to Moscow to discuss political possibilities to resolve the crisis," he added.

Russia is pressing a bid to restart a peace process for Syria that would include meetings between government officials and members of the opposition.

Assad said he backed the efforts of Syria's Russian ally.

"Russia has always been on the side of the Syrian people and given proof that it backs the people's right to decide its own fate," Assad said, quoted by the state news agency SANA.

"Russia respects the sovereignty of states and international law," he added during the meeting with Bogdanov.

Syria, said Assad, backs "positively the efforts by Russia to find a solution to the crisis."

The Russian foreign ministry said Assad and Bogdanov also discussed on "consolidating efforts in the fight against the Islamic State group and other terrorist organizations."

Bogdanov's visit to Damascus follows meetings he held with Syrian opposition groups in Lebanon and Turkey.

"In Istanbul, I met with Syrian opposition members," Bogdanov said as he arrived at his Damascus hotel.

"We want to reach an agreement on many issues with the Damascus authorities," he added.

SANA said Bogdanov informed Assad on the outcome of these meetings.

Last week, Khatib called for direct talks with Assad's regime to try to end the war.