Aoun: Seeing as Miqati is so Rich, Why Doesn’t he Fund STL? 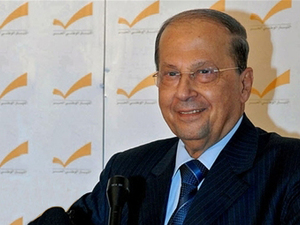 Timeline
MP Aoun: Everyone is in danger in Iraq, including Christians. They are not part of the conflict, but they have become targets, forcing them to immigrate. over 8 years
MP Aoun: I don’t understand Geagea’s fears over minorities. Look at the Patriarch as he meets with all sides and is helping to bolster mutual coexistence. over 8 years
MP Aoun on Geagea’s comments: We spoke of a MoU with Hizbullah that is based on consensual democracy. Yes, the minorities in Syria are in danger and the U.S. recognized this threat meaning they are responsible for the constructive chaos. over 8 years
MP Aoun on the recognition of a Palestinian state: The U.N. is still silent over the ongoing crimes being committed against the Palestinians. over 8 years
MP Aoun: The patriarch did not speak about politics and we hope those who are spreading rumors would cease their practices. over 8 years
FPM leader MP Michel Aoun after Change and Reform bloc weekly meeting: Regarding LF leader Geagea’s statements, who said there are majorities in Lebanon? Who represents a majority and who represents a minority? over 8 years

Aoun renewed on Tuesday his opposition to the Special Tribunal for Lebanon, rejecting attempts to fund it.

He said after the Change and Reform bloc’s weekly meeting: “Seeing as Prime Minister Najib Miqati and his brothers have amassed billions of dollars, then he can provide the $35 million Lebanon is obligated to pay to fund the tribunal.”

Miqati had announced at the U.N. Security Council on Tuesday Lebanon’s renewed commitment to respect international resolutions, including respecting the STL.

Addressing Lebanese Forces leader Samir Geagea recent statements that the MP has formed an “alliance of minorities,” Aoun asked: “Who spoke of such an alliance?”

“Where did he come up with such a thing?” he wondered.

“We will not tolerate such accusations from anyone without evidence,” he stated.

Aoun continued: “We signed a Memorandum of Understanding with Hizbullah that is based on consensual democracy. Yes, the minorities in Syria are in danger and the U.S. recognized this threat meaning they are responsible for the constructive chaos.”

Commenting on Geagea’s criticism of Maronite Patriarch Beshara al-Rahi’s fears over the safety of minorities in the region, he said: “I don’t understand his attack against the patriarch.”

“The patriarch is not making political stands and when he says that he fears that the minorities are in danger, he is bolstering mutual coexistence in the Middle East,” noted the FPM leader.

Al-Rahi had voiced concerns during his trip to France that extremist regimes would assume power in the Middle East, thereby threatening Christians in the region.

Geagea responded to these fears on Saturday by indirectly accusing the Syrian regime of posing a danger to Christians, asking: “What extremism is greater than that that was experience in Lebanon for three decades that led to the burdening of Christians?”

Addressing Palestine’s bid to be recognized as an independent state by the United Nations, the MP said: “The U.N. has remained silent over the ongoing crimes committed against the Palestinians.”

“They are now demanding to be granted what is left of their land following the 1948 occupation, so why has the international organization not yet recognized the Palestinian state?” he wondered.

The sectarian and treason bloc has met under its paranoiac leader again....in an annex at Deir Es Saleeb....

You are the rock of Lebanon mon général .

Seeing as your so funny, why dont you become a stand up comedian...

Seeing as your so crazy, why dont you seek help?

Seeing as your so in love with Bashar, what are you going to do about his wife?

because he is not traitor nor fool to fund stl

Aoun, you are simply an idiot; everyone knows that even your followers, hey look how many of your comrade in arms and exile are against now (except the one in prison for treason). I willing to bet that many of us free Lebanese will take a money collection for you to hire a shrink if you can’t afford one but I am sure you don’t need our money because you are on the Hizb and Syria’s payrolls. Plus all the millions that you and your wife stole before fleeing to France.
The scums of the earth Aoun, Berri, Nousrala, Wiaam, etc.. will disappear with Assad soon.

Oh God! This baboon either forgot how badly he used to criticize our former Patriarch or thinks he is the only individual authorized to criticize whomever he wants whenever he wants, with total disregard for what is proper and what is not. GO TAKE YOUR PILL YOU SANCTEMONIAL HYPOCRITE!

Amazing how puppets are more extreme than the parties they support...

What is wrong with the world!?!

only a total lunatic will consider hezb'allah as a puppet of PA or vice versa.

Great Idea
That proves that your point is that you remain silent about Major Crime committed against many major politicians and you have no interest in pursuing and knowing who committed this crime.

The politicians murdered were leaders or future leaders of a democratic process........
Why ignore the justice to seek the truth.....

Take the money from the 1.2 B$ electricity bill you want to charge us and not those in sabra/chatlia/hesbullah area that don't pay their bills.

why does he insist on being "his master's voice " ? ya 3eib eshoom !

I have an idea, if jabal habal, mowaten IRANI and bigdig VERYsmallBrain, all got together and paid for all the electricity they and their neighbors have been stealing for last 20 years, they can come up with the cash to pay for the STL in no time at all. Problem solved.

i wonder if you ever think before you open your mouth Mr. Aoun ? i bet you don't if you do you will not sound as stupid as you are now . but i suppose this is what we should expect from a pea brain . I'm sure the money is not the big object that the STL is looking for but rather the commitment from Lebanon . well speaking of commitments that's a word you don't even know to spell let alone know the meaning of it as a Lebanese I'm ashamed that some people in Lebanon are following you and making you there leader . to me you are nothing but a garbage man you pick up your masters garbage and you dump it on us thanks traitor

"What extremism is greater than that that was experience in Lebanon for three decades that led to the burdening of Christians?”

Seriously get some new editors...

Whoever is saying to pay the funds from a rich mans pocket means that they are protecting the killers Starting from Wiam and now Aoun. It would of been better for Lebanon if you stayed in Exile / not struck a deal with Syria.

You dont have any true beliefs in life. You were and always will be executing ORDERS... thats what they train you from day 1 in the army..you are back to being a soldier with no rank

and start explaining who paid or the new ferrari and maserati that Frodo ur son inlaw and your daughter just got themselves???

I cannot believe he got to that level of low-life talk, i mean i could undersand on Hariri, he says he robbed the state ( which i dont approve but wtv ) and now its Mikati's turn because he is a self made billionnaire, now General's true colours have shown, he is an envious, jealous, coward and brainless man, he and his son in law have stolen so much money out the telecommunication and energy ministries, how come Gebran that had nothing now rides wonderful cars, has half of Batroun, and his wife and her sister have compagnies in their names? is it the holy spirit that suddenly came to wake him up of a coma and they boh became wonderful business men and made millions in 4 years? give me a break you are the worst Lebanon has ever seen, even Hassouné the rat is better , at least he doesnt really show what his zionist-irano-syrian militia ha of money and still dresses like his favorite model the ayatollah khomeinei

Seeing as you embezzled millions over the years, why don't you fund the STL?
I'm certain you'd have more cash in your account than the current PM.
I'm sure if one of your allies had been killed, you'd have arranged the funding immediately.

Aoun is trsitor number one and an agent to the israelis/syrians/iranians.
why?
look at his carreer:
in 1982 he was collaborating with the israelis during the invasion of Beirut.
then he started the so called harb el tahrir (from the syrians) supposedly to give a pretext to the syrians to invade us, while he left valuable officers and soldiers battling them in the field he fled to paris.
then hard el elgha, and here no need to clarify the objective: weaken christians.
when the syrians needed him again, they called him in to assist them, and nw he is the spokesman for the iranians :)

History -if allowed to be written objectively- and the future developments in Lebanon will be able to tell who between Geagea & Aoun is the most loyal to his country. I stongly believe that, if they unite away from presuusres and personal interests, they'll be able to find a common paltform for understanding and will form the strongest political coalition in Lebanon.
Whatever one's opinion may be, Naharnet and the Nahar management should not allow indecent comments such as the ones are read with hatred that reached unimaginable levels. I find it disgusting!
God save Lebanon.