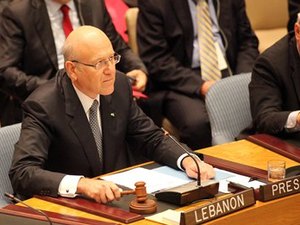 Timeline
Miqati: We renew our commitment to cooperate fully with the U.N. Interim Force in Lebanon and Lebanon hangs on to its right to demarcate its maritime border to exploit its natural resources. over 8 years
Miqati: You should trust in Lebanon because it is committed to justice as a means to achieve peace and it will always remain the land of freedoms and moderation. over 8 years
Miqati: We renew Lebanon’s commitment to U.N. Security Council resolution 1701 and all its articles. We renew our demand that Israel end its ongoing violations of Lebanon’s sovereignty in order to pave the way for a comprehensive ceasefire. over 8 years
Miqati: I renew President Suleiman’s statements that Lebanon is a founding member of the U.N. and it is therefore always obligated to respect international resolutions, including those on the STL. over 8 years
Miqati: Given the developments in Syria, Lebanon stresses its keenness on the safety of all Syrians. over 8 years
Miqati: Palestine meets all conditions to become a state according to U.N. standards, but it is an occupied state and we are therefore obligated to support it in achieving its independence. over 8 years
PM Miqati chairing U.N. Security Council: The Palestinian Spring was launched by demanding an end to decades of oppression and demanding that the world recognize its independent state. over 8 years

Prime Minister Najib Miqati stressed on Tuesday that Lebanon is always committed to implementing international resolutions, including respecting the Special Tribunal for Lebanon, which was stipulated in a number of Lebanese government policy statements.

Miqati stressed that “if Lebanon does not secure the necessary funding for the STL, then the country will be the first victim”, adding that “We are on the verge of extending the STL work in March, and we should prepare our files to present it to the Security Council”.

He said while chairing a United Nations Security Council meeting: “Lebanon is committed to justice as a means to reach peace and it will always remain the land of freedoms and moderation.”

On the developments in Syria, he stated: “Lebanon is keen on its unity and the safety and security of its people.”

Furthermore, he renewed Lebanon’s commitment to the implementation of U.N. Security Council resolution 1701, demanding that the international community pressure Israel to respect the resolution as well and withdraw from the Kfarshouba hills and Shabaa Farms.

In addition, it should be pressured to cease its ongoing violations of Lebanon’s sovereignty, which should pave the way for a cessation of hostilities and comprehensive ceasefire, he added.

Miqati also reiterated Lebanon’s right to demarcate its maritime border to exploit offshore gas and oil that was discovered in the Mediterranean Sea.

On this note, he commended the United Nations Interim Force in Lebanon for its role in helping Lebanon demarcate its land border in the South, stressing that Lebanon is keen on maintaining cooperation between it and the Lebanese army.

Addressing the Palestine’s bid to be recognized as a state by the U.N., Miqati said: “It meets all the required international standards … but seeing as it is an occupied state, we need to support its efforts to be recognized, end the occupation, and achieve its independence.”

In an interview with the journalists, Miqati stressed that if Lebanon does not fund the STL, the sole benefactor is Israel “since we will be giving them what they could not take during war”.

He added that the STL today has become a fact, and “comments should be presented to the U.N. in order to make the necessary amendments."

This is a goodd joke! It's like Ahmedinajad chairing the year end graduation at Harvard University! We're in the unfortunate position of a ZERO credibility (debility!) in the Western World, and a High standing with the terrorist rogue countries in the world!

Mikati is the political front. Says one thing to the world while Hezbollah acts in the other direction...

that voodoo that you do (Guest) over 8 years

Aoun replied: Harming Lebanon is what I do.