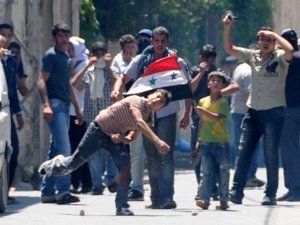 Syrian forces mounting raids on dissidents killed at least nine civilians on Tuesday, rights groups said, as Damascus accused the West of trying to break up the country with "total chaos."

And as China expressed its concern at the wider implications of the turbulence, the United States warned of signs that President Bashar al-Assad's opponents were turning to violence.

Six people were killed in the central city of Homs, two more in the northwestern city of Idlib and another in southern Daraa province, where the protests began in mid-March, the Syria Observatory for Human Right said.

Powerful guns, some mounted on tanks, were used on people in Rastan, Talbisseh and Tir Maala, all in central Homs province, the Observatory added, a day after reporting four soldiers were shot dead trying to desert in Idlib.

The Local Coordination Committees, which organizes protests on the ground, reported a "massive deployment" of security forces in Rastan.

In a blog he launched on Tuesday, British ambassador to Damascus Simon Collis said Assad's regime sees "only one way out -- the return to authoritarian rule where fear surpasses a desire for freedom."

"This is a regime that remains determined to control every significant aspect of political life in Syria. It is used to power. And it will do anything to keep it," Collis wrote.

"How can we otherwise explain media provocations, financing and arming religious extremism," he asked.

"What purpose could this serve other than total chaos that would dismember Syria -- and consequently adversely affect its neighbors."

Muallem said anti-regime protests in which at least 2,700 people have been killed have become a "pretext for foreign interventions."

Damascus does not accept the existence of popular opposition to the authorities, instead blaming "armed gangs" and "terrorists" for trying to sow chaos.

Asked later if the U.S. was ready to aid opponents of Assad's regime who are reportedly arming themselves, State Department spokesman Mark Toner said overnight that resorting to violence was unsurprising.

"I would say that the opposition's shown extraordinary restraint in the face of the regime's brutality and demanding their rights through peaceful unarmed demonstrations," Toner told reporters.

"It goes without saying that the longer the regime continues to repress, kill and jail these peaceful activists, the more likely that this peaceful movement's going to become violent."

On the political front, meanwhile, the opposition Syrian National Council announced plans to meet in Istanbul this weekend in a bid to unify the fragmented coalition.

"We will meet on October 1 and 2, in principle in Istanbul," spokeswoman Bassma Kodmani told AFP. "Then we will talk about setting up committees."

The council, which was set up in August and consists of 140 people. Half of them live in Syria and their names have not been made public for security reasons.

The global community should "handle the Syrian issue in a prudent way so as to prevent further turbulence in Syria and its repercussions on regional peace."

Yang, whose country has joined Russia in opposing sanctions against Syria, said "we hope that parties in Syria will exercise restraint, avoid any form of violence or more bloodshed and conflict, and act quickly to ease tension."

Meanwhile, European powers have drawn up a new resolution on Syria that would call for a threat of sanctions rather than demand international measures, diplomats said.

"There is a need for a strong Security Council response to the repression," said one European diplomat in New York.

"There are hopes that this resolution can quickly get a majority in favor on the council," said a diplomat from a second council member.