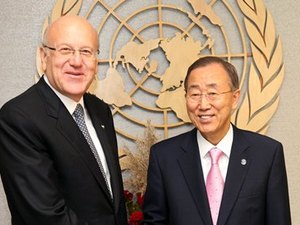 U.N. Chief Ban Ki-Moon on Tuesday said that he is interested in seeing the Lebanese government secure the necessary funding for the Special Tribunal for Lebanon.

After meeting PM Najib Miqati in New York , Ki-Moon said that the “U.N. stresses on Lebanon’s stability, prosperity, and unity” adding that the U.N. is satisfied with the cooperation between the Lebanese Army and the UNIFIL.”

According to the statement by Miqati’s media office, Ban said “We are keen on having the Lebanese government secure the necessary funds for the STL, and on paying the necessary attention to the Palestinian camps and the reconstruction of Nahr al Bared.”

In turn, Lebanese PM Najib Miqati pointed out that Lebanon is “proud to be a U.N. founding member”, and renewed its commitment to the international legitimacy and the UN Resolutions, stressing that “peace is not permissible except through this organization and its resolutions.”

Miqati renewed Lebanon’s commitment to implementing resolution 1701, and called on the UN to help “put an end to Israel’s continued violations of this resolution”.