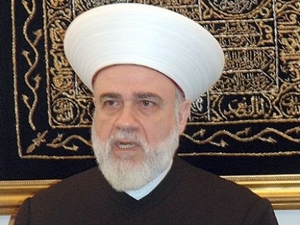 “The summit came at the right time in a spontaneous way without any long preparations,” Qabbani told the daily.

He noted that the closing statement “was discussed during the meeting, and there was nothing confidential.”

Qabbani stressed “there was no dispute on the national headlines that were tackled by the closing statement.”

He said that the summit will be held in rotation without specifying the time of the next summit.

However, sources told al-Liwaa newspaper that the third spiritual summit will be held at the Druze Community House in Verdun, following a request by Druze spiritual leader Sheikh Naim Hassan.

The spiritual summit that was held on Tuesday highlighted the historic role Christians have played in the East, saying that they have and still play a central role in the region.

“The country’s stability is based on the principles of mutual coexistence, as well as respecting the constitution and sovereignty of the state,” the statement said.

Meanwhile, An Nahar newspaper reported that a meeting was held between former PM Fouad Saniora and Qabbani in order to overcome the latest dispute between them.

The daily said that the conferees discussed the latest developments.

According to al-Akhbar newspaper, al-Mustaqbal movement launched an attack against the Mufti when he stressed that Premier Najib Miqati deserves to be given a chance as PM.

It said that Mustaqbal accused Qabbani of supporting the Syrian regime crackdown on Hama by meeting with Syria’s Ambassador Ali Abdul Karim Ali and of targeting the Special Tribunal for Lebanon by holding talks with the Hizbullah delegation on the day the STL accused four members of the party of involvement in ex-Premier Rafik Hariri’s 2005 murder case.

What about the greek orthodox representative that was there?

Religious clerics stay out of politics. Religion is the root of Lebanon's sufferings.