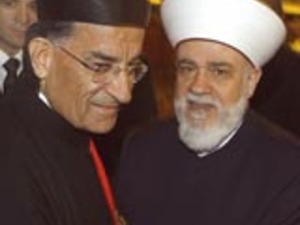 Grand Mufti Sheikh Mohammed Rashid Qabbani has called for an investigation into the “technical mistake” that led to the broadcast of Maronite Patriarch Beshara al-Rahi’s remarks at the Islamic-Christian summit held at the Dar al-Fatwa on Tuesday.

Al-Liwaa daily said Wednesday that it had been agreed to broadcast only Qabbani’s opening statement. But Dar al-Fatwa’s radio station mistakenly leaked al-Rahi’s remarks prompting the Mufti to withdraw the statement.

Al-Rahi was quoted by the station as saying that he had asked for French help in removing the pretexts that justify Hizbullah’s weapons and strengthening the Lebanese army.

“Only then can we tell Hizbullah that there is no need to keep its arms,” the patriarch told the spiritual leaders gathered at Dar al-Fatwa.

“We hope that the developments in Syria won’t develop into a civil war between Sunnis and Alawites that may spread to Lebanon,” he warned.

He reiterated his fear of the ascension of extremist groups to power in Syria.

A spiritual source said that during the summit, al-Rahi argued with Vice President of the Higher Islamic Shiite Council Sheikh Abdul Amir Qabalan when the patriarch was informing him about his discussions with French President Nicolas Sarkozy and other officials in Paris.

Al-Rahi told Qabalan that a high-ranking French official said there will be no impunity for the dictatorial regime in Syria. At this stage, Qabalan objected to the words of the patriarch who stressed that he was just quoting what the official had told him.

“I told you about what the French are saying. This is not my opinion,” al-Rahi told Qabalan.

The leak, which overshadowed the summit, is expected to spark more controversy. Al-Rahi’s statements in France have already angered the Maronites of the opposition March 14 forces.

But the spiritual leaders avoided discussing any controversial issues. The closing statement did not deal with the Special Tribunal for Lebanon and Hizbullah’s arms.

It stressed the importance of historic and current cooperation between Christians and Muslims in Lebanon and said: “All sides should adhere to the civil state, frank dialogue, and reject foreign meddling in Lebanon.”

whatever he does, the truth is still coming out: he is faithfull to syro/iranian masters.
soon Rome will revoke his nomination, and we thank him for making this so clear.

what you call irreparable damage, is actually a drastic improvement of bkirki reputation, except among the lebanese fartses and their mr. prison lady gaga war criminal.
and perhaps new generation of "mr. irrelevants", sami na nadim who try to be bashirs, but are only lost in time.

Power hungry clercs. Stay out of politics. Espcially fatso in the hole

You're really scared of Geagea arn't you....

I guess you thought I was refering to you as "habal" ;-)