More Conflicting Reports on al-Rahi’s Visit to the U.S. 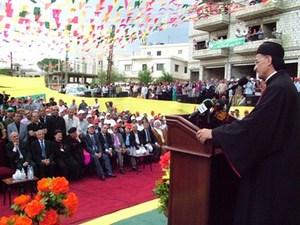 Maronite Patriarch Beshara al-Rahi has informed President Michel Suleiman and Speaker Nabih Berri that he hadn’t asked for an appointment with President Barack Obama amid reports that the U.S. administration had snubbed him over his controversial remarks on Hizbullah’s arms and the situation in Syria.

As Safir daily said Wednesday that al-Rahi informed Suleiman and Berri about the issue during the lunch banquet thrown in the patriarch’s honor in Msayleh on Monday.

The patriarch stressed to the two officials that U.S. Secretary of Transportation Ray Lahood, who is of Lebanese origin, was seeking to arrange a meeting between him and Obama.

Al-Rahi claimed that U.S. Ambassador Maura Connelly told him that it would be hard to appoint dates for meetings between him and U.S. officials over his controversial remarks. He snapped back at her saying that he wasn’t asking for meetings with anyone “because his visit is pastoral and not political.”

But informed U.S. sources told Ad-Diyar newspaper that al-Rahi informed Connelly he was seeking for the mediation of Lahood to set a date with Obama. However, the ambassador said: “Let’s wait for the visit to the south first.”

She was referring to al-Rahi’s visit to southern Lebanon last weekend.

Upon hearing her remarks, the patriarch stressed in the south that Lebanon cannot overstep Security Council resolutions to appease the Americans, the source said.

The patriarch kicks off his three-week visit to the U.S. on Oct. 1. His first stop will be the city of Saint Louis in Missouri. The patriarch’s trip will include stops in Maronite parishes in the states of Illinois, Ohio, Texas, California, New York, Pennsylvania, Massachusetts and others.

On Oct. 21, he is scheduled to hold talks with U.N. chief Ban Ki-moon.

if this patriarch thinks he can outsmart everyone else... he can dream.
we now all know what he is about, he will realize soon he only has the syro/iranian support, not the Lebanese support.
he can leave to iran or syria whenever he wants.
he is trying desperately to meet with US officials to serve them more lies....

This Patriarch is displaying Lebanon's most prominent characteristic - CONFUSION!

He doesnt know which direction he is headed!

To all Lebanese in the US who don't believe in what Rahi stated about weapons and bashar: boycott his events in your cities.
bala tobyid tanajir, there is far more to lose by showing up and kissing his hand. Let's be clear that we do not support such statements!