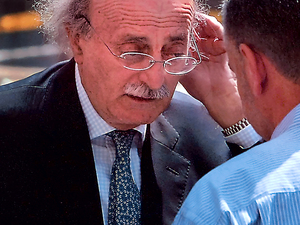 The newspaper said the first phase of the deal involves the immediate payment of 7 million dollars.

Jumblat visited Libya earlier in the month, where he held talks with Mustafa Abdul Jalil, head of the NTC, his deputy Abdul Hafiz Ghogha and a number of NTC members.

A statement issued by PSP’s media department said Jumblat congratulated the rebels for their triumph on decades of darkness and dictatorship under Moammar Gadhafi’s rule.

Payment for what? Who pays who? What does the payee receive in return? In what capacity has this deal been struck? If this deal involves Lebanese recourses, then who has authorised jumblatt to make such a deal. I only noticed the "social affairs" minister? Is the deal related to social affairs?

Come on naharnet, who do you have working on these articles?

why blame naharnet for reporting?
the deal seems to have been made by joumblat in his capacity of owner of a fuel company.
he is making benefit of the lybian stance :) business as usual.

really? you call that an informative article??? Who is writing your articles?

Whats the deal? who pays who?

really is puzzling...he got money for what???

shab this is not only disgusting, it's insulting and retarded

He bought the frozen corps of Sadr

Bala Amel your avatar is an insult to the brave Lebanese Amel fighters whom fougtht the filthy He-zbelleh militia and the Palastinian invaders.

Great deal.
Is it his private buisiness....if so why report it.

Why two ministers accompany him....don't they represent the government or in what capacity...??

Congratulating the rebels on behalf of the government or PSP.....
Sound confusing or it is Mafioso land...each acts based on his own camp....
Who is going next ????

To Shab and others....be sensitive and polite

PLEASE HELP! Who's running our country?

Is Jumblat entitled to bring contracts?

is it the beginning of decentralisation?????IS IT PROVINCIAL OR FEDERAL DEAL??

For bigdig: dont u see that is addiyar daily informations?