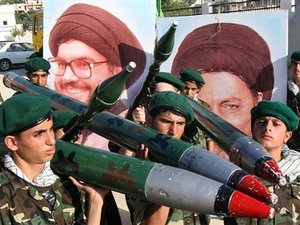 A U.S. Republican lawmaker has warned that Hizbullah could build "missile sites" in Cuba and pose a threat to the United States.

"Why would you normalize trade with a country that sponsors terror?" Rep. Michele Bachmann asked an audience of supporters in Cedar Rapids, Iowa Monday, in response to a question about her position on trading with Cuba.

"There are reports that have come out that Cuba has been working with another terrorist organization called Hizbullah,” she said.

The Shiite party “is looking at wanting to be part of missile sites in Iran and, of course, when you are 90 miles offshore from Florida, you don't want to entertain the prospect of hosting bases or sites where Hizbullah could have training camps or perhaps have missile sites or weapons sites in Cuba. This would be foolish," she added.

Bachmann was apparently referring to an unsourced report in the Italian newspaper Corriere Della Sera earlier this month about how a handful of Hizbullah members have set up some sort of encampment in Cuba.

The report was never backed up in major publications but was picked up by conservative blogs like Glenn Beck's The Blaze and Andrew Breitbart's Big Peace.

yes the zionist would want that.

you see, by such statements it's obvious that you are not lebanese.

a true lebanese, even the extremists either salafist or lebanese fartses, would not care for "bombing iran". they care more about bombimng syria, but why iran? of course with such statements, you only prove what i have realized a long ago, that you are from zionist information war department

this article is journalism disgrace.

an nahar cares what some member of congress says about hezb'allah making bases on cuba.
CUBA?!?!?!

of course not a shred of evidence.

while it's funny that paranoid zionist lobby raises hezb'allah to the level of former USSR, it's totaly absurd and irrelevant and an nahar should not write such crap.

I dont like Hezbollah but even I know this is pure lies and propaganda (for both sides may I add).

America continues its culture of creating fear, and this just blows Hezbollah power completely out of proportion.

Having said, it is still a sign of the dangers Hezbollah pose to Lebanon and law-obiding Lebanese citizen has had enough of the tension in country.

HAND IN YOUR ARMS TO THE ARMY FOR THE GOOD OF THE COUNTRY!

for your information, here is the article in full:
http://www.huffingtonpost.com/2011/09/27/michele-bachmann-hezbollah-cuba-missile-sites_n_983671.html

start packing your stuff, because soon you will not find a rock to hide under :)
bye bye iranian lovers :)

LOL!!...Michel Bachman also said that God was telling the Presidant and congress, through the recent hurricanes and earthquake, to listen to the people and lower taxes and stop Obama care!

Geha, why would anyone care if Iran got bombed? Seriously, your a tool.

personally I welcome bombing iran :)
address your comments to habel amel who is scared of this matter :)

It is not Bachman who came up with the info. It is the "Corriere della Sera ", the Italian Newspaper.

some filthy zionist information war department is trying to persuade himself or who ever that we take orders from some ayatolah.

after fadallah died i have no idea who is lebanese shia ayatolah anyway, much less to take orders from him

It makes me laugh to see the Persian Propagandists always defending Iran, Syria, and Hezbollah.

The question you have to ask is..... Why do jabalamel, Mowaten, Bigidiot, MrNoBrain, and Ado spend 24/7 on a website that is leaning pro-M14?

I've heard their excuse that they do it for "entertainment" or whatever lame excuse. The truth is, that the only explanation is that they are paid propagandists.

If you know who owns Naharnet, and you know who Gebran Tueni is, then you can understand that this site respects the views of M14. This is not a worldwide news organization with hundreds of reporters all over the world, it is a small organization that relies on other news sources for their articles. So for all the idiots who come here to criticize Nahranet and their articles, the question is.... why do you come here? Nobody is forcing you? Unless you are paid to do so.

And to jabelamel.... nobody believes a word that you say, in fact whatever you say, the opposite is usually true. You are a paid Persian propagandist. Why do you come to this website? If you don't like Naharnet, yet you post multiple comments on every article 24/7, then you are probably paid to post your drivel here. You always defend Iran and Syria. Then you accuse M14 commenters of being "Zionists".

When have you seen an M14 commenter defending Israel? M14 represents half the country, are all of them Zionists?

M14 doesn't consider all "southern Lebanese" as Persians, only the ones who come to an M14 website and post pro-Iranian comments 24/7. And the fact that you claim to be from "Southern Lebanon" means you are likely lying about that, you are probably posting from Tehran or Qoms.

If you don't like Naharnet, go somewhere else. Nobody buys your lame propaganda.

Movie of the year in Hollywood :D