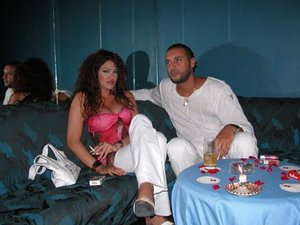 In the dozens of photographs, found on a laptop belonging to Gadhafi's son and made available by former Libyan rebels to AFP, Hannibal, 36, and his Lebanese wife Aline Skaff are shown partying in European capitals, on a private jet and on a yacht off the Egyptian coast.

The couple is famed for having provoked diplomatic tensions with Switzerland when they were arrested in 2008 in a luxury hotel in Geneva for allegedly assaulting two former servants.

After the fall of Tripoli last month, an Ethiopian nanny also said she had been beaten and severely burnt while working for the couple.

The undated photographs show the couple on luxurious trips to Paris, Rome and the Egyptian resort of Sharm el-Sheikh. They are shown flying on a private jet, lounging in bathing suits on a luxury yacht and shopping in expensive boutiques.

Skaff, 31, is often shown in suggestive poses on beds or at the beach and the couple is shown in some of the photos surrounded with alcohol, which is banned in Libya. Some of the photographs were of a pornographic nature.

The lavish lifestyles of Gadhafi's family and entourage helped fuel the anger in Libya that sparked the protests that led eventually to the former strongman's ouster.

Hannibal was among a group of family members -- including Gadhafi's wife Safiya, son Mohammed and daughter Aisha -- who escaped to neighboring Algeria after the fall of Tripoli.

Following Hannibal Gadhafi's 2008 arrest in Switzerland, his father's regime demanded that no charges be brought and an "apology" over the allegations that he had assaulted two former servants, a Tunisian and a Moroccan. In September 2008, the court dropped the case.

Hannibal also previously received a four-month suspended sentence and a 500-euro fine for assaulting his pregnant girlfriend in France which media reports had said was Skaff before marrying him.

Proud to be Lebanese!

There is nothing to be proud of. The behavior of Aline Skaff is symptomatic of Lebanese women in particular and Lebanese society at large: The average Lebanese woman dreams of a husband like this disgusting Ghaddafi, servants and maids, luxury crap, fancy cars..... No matter how much we the Lebanese brag about being "superior" to others, we are basically primitive folks with a veneer of civilization. Nothing to be proud of, and everything to be ashamed of. We should thank Nadine Labaki and her movies for bringing forth our hypocrisy and our duplicitous lives.

this lady is not a proper representative of the lebanese females. we have to be proud of those true lebanese who fought their life through tough times under syrian and israely occupation, who gave their kids as hero martyrs and who are true nationals of the lebanon...who are working all year round to suppoort families and all
your statements are general and foolish to take one stupid example 1/3.5M lebanese ...look at them successful reputed well set over the globe......be fair and judge fairly...are all the libyans like this faget...or like his father...are all the syrians criminals....examine your thoughts before you post....

I think aNOUNYMOUS was being sarcastic.

she is a sick woman... see what she did to the nanny of her kids!
But the sad thing is that she would have gotten away with it even had she been living in Lebanon.

Not justifying their actions, but the sad truth is that if you give anyone enough money and power, they are bound to behave the same way independent of race or religion. Those who don't behave that way with power are called prophets and messengers of God, and those are long dead.

"The lavish lifestyles of Gadhafi's family and entourage helped fuel the anger in Libya that sparked the protests that led eventually to the former strongman's ouster."

That is not true. We have not heard one word about their lavish style during the NATO revolution. For potato's sake, Moammar Qathafi lived in a tent! Clearly his children had other ideas.

Kuwaiti in lebanon (Guest) over 8 years

Romeo, you are deluding yourself. Most lebanese women regardless of sect are shallow, arrogant 50 kilo make up wearing gold diggers with an obsession with money, plastic surgery, maids etc. This is true regardless of which sect or class they belong too. And the lebanese men arent much better when it comes to doing anything for money.

her name is HANNIBAL for God's sake.. what do you expect...