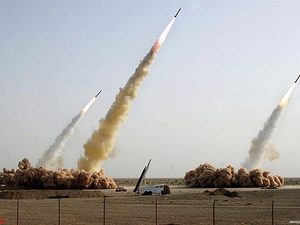 Iran has equipped its naval forces with a short range "cruise missile," able to hit targets in coastal areas and warships within "200 kilometers, the country's defense minister was quoted as saying on Wednesday.

"Today we are witnessing the equipping of the Guards navy and army navy with ample numbers of the Qader cruise missile," General Ahmad Vahidi said, quoted by his ministry's website referring to the elite Revolutionary Guards who are tasked with defending Iranian waters in the Gulf.

"It has 200 km range and has ability to be launched quickly against warships and costal targets. It flies in low altitude, has high destructive power, (and is) lightweight with high precision," he added.

He added that it could be fired from the coast or from vessels of different classes, increasing considerable the operational ability of the forces.

The Qader missile was unveiled last month by President Mahmoud Ahmadinejad, with Iranian officials dubbing it a "cruise missile" built entirely by local experts. The president said Iran's military arsenal was defensive, aimed at ensuring the country's "enemies do not dare attack."

Iran in the past two years has increased development, testing and unveiling of new "indigenous" military equipment, including missiles.

The Iranian navy recently boosted its presence in international waters, sending vessels into the Indian Ocean to protect Iranian ships from Somali pirates.

It also sent two ships into the Mediterranean for the first time in February, via the Suez Canal, to the annoyance of Israel and the United States.

Iranian naval forces are mainly composed of small units equipped with missiles in the Gulf and operating under the control of the Revolutionary Guards.

If that's not ASKING FOR IT I don't know what is! I think the free world more than ever has to consider a major military pre-emtive fatal strike on this Genocidal Criminal Mullah regime in Tehran and Quom, these brainless zombies cannot be trusted with conventional weapons much less if they get their grubby little hands on Nuclear Weapons technology. The Free world is seriously running out of precious time... Time for action to send this criminal regime back to hell where it came from...!!