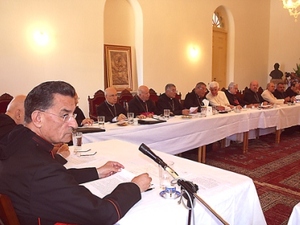 The Council of Maronite Bishops on Wednesday appealed to Maronites to support the patriarch and urged the Lebanese to join hands and sit at the dialogue table to renew trust in each other.

Maronite Patriarch Beshara al-Rahi believes that “unity is force,” an appeal issued by the bishops following their monthly meeting said. “He calls everyone for dialogue and understanding and rejects the logic of war.”

“Let us all return to our roots as Lebanese, join hands and sit at a friendly, honest and transparent dialogue table … to renew our trust in each other,” they said.

The bishops stressed that al-Rahi’s visit to France was aimed at asking the international community to assume its responsibilities in ending injustice and spreading equality among people by monitoring the implementation of U.N. Security Council resolutions in a just way.

They hoped that all peoples would enjoy freedom and equality of rights and would cooperate to accept each other’s existence.

Al-Rahi’s statements from Paris have sparked controversy. He has linked the fate of Hizbullah’s arms to the liberation of the remaining occupied Lebanese territories and said Syrian President Bashar Assad should be given the chance to introduce reform for fear that the presence of Christians in the region would be threatened if the Muslim Brotherhood rose to power.

“The patriarch has become an essential partner in the formation of the Lebanese nation,” the proclamation said, adding that “it hasn’t ceased to consolidate this historic role.”

Turning to the Islamic-Christian summit held at Dar al-Fatwa on Tuesday, the bishops said al-Rahi attended two spiritual summits since his election because “the Christian presence in this region of the world won’t last unless there is openness between all religions at the level of spiritual and civilizational dialogue.”

The first summit was held in Bkirki. There is an attempt to hold a spiritual summit at the level of the entire region, the proclamation said.

It lauded al-Rahi’s visit to Lebanese regions and said the trips inside and outside Lebanon will “continue on the same pace.”

The patriarch is scheduled to make a three-week visit to the U.S. on Saturday.

Give us Honest Dialogue about Non-State Weapons and we will support the Batrak without question!

Unity can only be made through the backing of the STL, and through applying everything that had been agreed by the latest table of dialogue, except for the one pending issue: Hizbullsilah arms! But even that, is today totally outdated. How can you sit and dialogue with those, who as we know it today, are accused of having decimated the political opposition through carefully planned murder??Is this a plea for mercy so they don' t kill any more??

Generic words and double talk are what brought the calamities to lebanon. While Hezbollah is reducing the lebanese to Iranian subjects their spiritual leaders are patting each other on the back !
we promise you the day of reckoning is closer than you comfortably believe!

if this patriarch is afraid about the syrian christians after the fall of this regime, then let me ask why is it our problem in Lebanon?
these christians in Syria supported this regime while this regime was doing the unspeakable in Lebanon, so I do not relate to them!!!