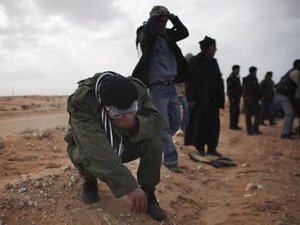 Anti-Gadhafi fighters Wednesday appealed for help from NATO after being blasted by rockets fired by loyalist troops in Bani Walid, one of the ousted Libyan leader's last bastions.

Among 11 National Transitional Council fighters killed in the barrage was senior commander Daou al-Salhine al-Jadak, whose car was struck by a rocket as he headed towards the front late on Tuesday, NTC chief negotiator Abdullah Kenshil told Agence France Presse.

NTC field commander Captain Walid Khaimej said, meanwhile, that the fierce resistance of Moammar Gadhafi's loyalists had stalled the advance by NTC fighters in the desert town, some 170 kilometers (100 miles) from Tripoli.

"There is always incoming missile and artillery fire. We are returning fire with heavy weapons but we are not sending in infantry. We are waiting for reinforcements to come from Tripoli and Zawiyah," said Khaimej.

"NATO is here but is not doing enough. They take out the rocket launchers firing at us, but they are immediately replaced. We need more help from NATO," he added.

The Western military alliance has under a UN mandate being giving air support to a popular revolt against Gadhafi launched in February which saw the veteran strongman toppled from power after 42 years by NTC forces last month.

Gadhafi has gone into hiding since Tripoli was overrun on August 23 but he and some of his sons are still believed by the NTC to be in Libya, possibly even in Bani Walid or in his birthplace Sirte, where his last remaining forces are putting up fierce resistance.

Jadak was one of the highest ranking NTC military commanders in Bani Walid and hails from the oasis town itself.

Two days before he was killed, he told AFP he had been imprisoned for more than 18 years for helping organize a rebellion against Gadhafi in 1993.