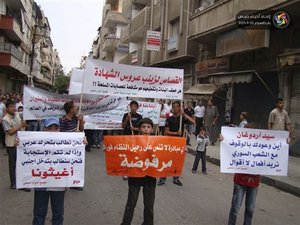 Rights activists in the city accuse Syrian authorities of carrying out the killings.

Rights activists, who set up an alliance under the name al-Ghad on September 18, accuse the authorities of having "killed scientific personalities in Homs, trying to repeat the scenario of assassinations" perpetrated in Syria in the 1980s.

Syria for some six months has been in the throes of a peoples' uprising in which the U.N. says some 2,700 people have been killed by an army crackdown. The authorities in Damascus accuse the West and "armed gangs" of trying to sow chaos in the country.

On Monday, security forces killed nine civilians during a sweep against militants in the northwest, south and center of the country, activists said.