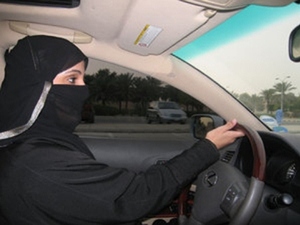 Saudi King Abdullah has revoked a sentence of 10 lashes imposed on a woman for breaking the ban on women driving in the conservative kingdom, a Saudi princess said Wednesday on her Twitter account.

"Thank God, the lashing of Sheima is cancelled. Thanks to our beloved King. I'm sure all Saudi women will be so happy, I know I am," said Princess Amira al-Taweel, wife of billionaire Saudi Prince Alwaleed bin Talal.

"In tough times we stand together; in good times we celebrate together," the princess said. "I'm proud to be Saudi. To all Active Saudi women thank you for your efforts."

Sheima Jastaniah was sentenced on Monday by a court in the Red Sea city of Jeddah, where she was caught driving in July, a rights activist said.

"We were shocked yesterday (Monday) that she was sentenced to 10 lashes," the activist said, adding Jastaniah would appeal the verdict.

The sentence came a day after the king announced women would be allowed to vote and to run in municipal polls, and to join the all-appointed Shura (consultative) Council, a first in a country that imposes many restrictions on women.

Amnesty International condemned the sentence, saying it demonstrated the "scale of discrimination against women in the kingdom."

"Flogging is a cruel punishment in all circumstances but it beggars belief that the authorities in Saudi Arabia have imposed lashes on a woman apparently for merely driving a car," said Amnesty's Philip Luther.

"Belatedly allowing women to vote in council elections is all well and good, but if they are still going to face being flogged for trying to exercise their right to freedom of movement then the king's much-trumpeted 'reforms' actually amount to very little," he said.

Also on Tuesday, women rights activist Madiha al-Ajrush was detained briefly in Riyadh after she was caught driving around the capital with a French freelance journalist who was working on a video documentary on women.

The journalist said she herself was set free after her consulate intervened, while Ajrush was later released according to posts by the Women2Drive campaign on the group's Twitter page.

Women2Drive said police requested a male guardian to sign a pledge that Ajrush would not drive, but when no one was reached, she was told to sign herself and leave.

A group of defiant Saudi women got behind the wheels of their cars on June 17 in response to calls for nationwide action to break the ban.

The call spread through Facebook and Twitter was the largest mass action since November 1990, when 47 Saudi women were arrested and severely punished after demonstrating in cars.

Ajrush was one of the women who took part in the protest.

In a February 2009 interview, Princes Amira said she was frustrated that she was not allowed to drive in her own country.

She told the Al-Watan newspaper she was ready to get behind the wheel as soon as the government in Riyadh gives women the right to do so.

"I am certainly ready to drive. I have an international driving license and I drive in every country of the world that I travel to," she told the paper.

"I would like to drive here with my sister or my friend next to me instead of a driver."

Prince Alwaleed, a nephew of the king, has been outspoken in promoting more freedoms for women in Saudi Arabia, where strict Islamic rules also prevent them from going out on their own without a male guardian.

Lek wayn ba3doun!!!! What an event!
Welcome to the Renaissance, as Saudi has just got out of the Middle Ages, and will take another few centuries to catch up woth the current times.