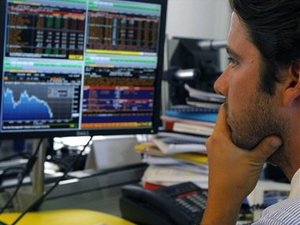 European stocks fell and Wall Street rose in cautious trade on Wednesday amid doubts that Eurozone leaders were any closer to resolving the debt crisis before EU-IMF auditors were due to arrive in Athens.

After see-sawing during the session European stocks closed down with London's FTSE-100 index dropping 1.44 percent to 5,217.63 points.

"Until we see more conviction in the buying and more clarity on Europe, volatility should remain high," said Sameer Samana of Wells Fargo Advisors.

Asian stock markets mostly rose on Wednesday but the gains were capped by the lack of concrete evidence of a Eurozone plan, traders said.

Shares in Europe and the US had soared on Tuesday, with London closing up 4.2 percent and Paris almost 6.0 percent, on fresh hopes that European leaders would get to grips with the debt crisis.

"Reality seems to have set in. Reports in the financial press today suggest the EU is split on how to solve the sovereign debt crisis, which may dampen investor sentiment."

The Financial Times said Greece's second bailout had run into trouble, with some Eurozone members pushing for private creditors to take a bigger writedown on their Greek bond holdings.

In an interview with Greece's state television, German Chancellor Angela Merkel appeared to confirm this, saying the audit could also determine if the second bailout set up in July will stand as originally agreed.

"Should we renegotiate or not?" Merkel said. "Of course we would prefer that the figures remain unchanged, but I cannot foretell (the mission's report)."

The head of the German banking federation criticized the rampant talk Eurozone governments may now push private holders of Greek government bonds to accept losses of 50 percent instead of 21 percent as agreed in July.

"If governments now unravel the deal that was reached on private-sector involvement, then the loss in confidence for the financial markets would more than negate the benefits of any such action," Andreas Schmitz told the German daily Bild.

In Greece, the government was hoping for a last-minute EU-IMF rescue amid fresh protests against austerity measures after Athens pledged a "superhuman" effort to stabilize its debt-stricken economy.

A mission from the EU, the International Monetary Fund and the European Central Bank was expected in Athens Thursday to resume an audit vital to the release of rescue funds from the first bailout loan to Greece.

Athens has warned it will run out of money next month unless it receives the rescue funds.

A key contributor to the rescue, Germany, was meanwhile scheduled to vote Thursday on expanding the scope and size of the EU's rescue fund -- the European Financial Stability Facility (EFSF).

"All eyes remain on Germany and Greece to see if they will get their next tranche of bailout funds," said Capital Spreads analyst Simon Denham.

"The German chancellor faces a crucial vote of confidence tomorrow as her parliament votes on the extension of the EU bailout funds. The vote is expected to be passed," Denham said.

Greece will remain in the Eurozone but must meet its reform commitments in full, the head of the European Commission, Jose Manuel Barroso, said Wednesday.

He also called for the creation of joint Eurozone bonds and said he would propose options in the coming weeks despite German objections.