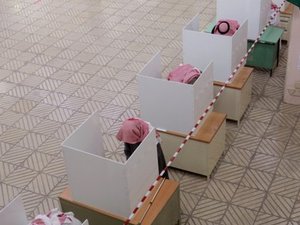 Saudi men were voting on Thursday in municipal elections, the last all-male affair in the Muslim kingdom after a royal decree this week gave women the right to cast ballots in four years.

Some 5,324 candidates are competing for 1,056 seats -- only the second elections in Saudi Arabian history -- to fill half the seats in the country's 285 councils. The other half are appointed by the government.

The first elections in the Gulf kingdom, which has a population of around 27.5 million, including around 19 million Saudis, were held in 2005, but the government extended the existing council's term for two years.

Around 1.2 million male voters have registered to take part.

The early hours of voting appeared to attract little interest on the first day of the Saudi weekend on Thursday and Friday.

Just a few voters showed up before midday at a polling station in al-Olaya neighborhood in central Riyadh, an Agence France Presse correspondent reported.

"The movement is slow before noon. People are still asleep because it is a day off," said candidate Abdulwahab al-Maliki.

Voting was also slow in the country's economic capital, the port city of Jeddah on the west coast.

The results of the vote are expected on Sunday.

Thursday's polling comes just four days after absolute monarch King Abdullah granted women the right to vote and run in the next municipal elections in four years, a historic first for the ultra-conservative country.

Women's rights activists had long fought for the right to vote in Saudi Arabia, which applies a strict version of Sunni Islam and bars women from driving or travelling without the consent of a male guardian.

In addition to participating in the only public polls in the country, King Abdullah also announced he had decided to admit women to the Shura Council, an all-appointed consultative body.

Saudi Arabia does not have an elected parliament.

The monarch's move was hailed by the United States and Britain, with both calling it a significant "step forward."

But the moves were also seen by some as insufficient.

Hussein Sharif, head of the human rights association in the western city of Mecca, said: "Women still have a long way to go" to gain their rights.

And Fahad Al-Harithi, head of Asbar Centre for Studies, Research and Communications, said: "The road for women to gain their rights is still too long. She is still marginalized... in terms of her rights and duties."

"King Abdullah's promise that women will finally be allowed to vote is a welcome move away from the discrimination and exclusion that Saudi women have suffered for so long," said Sarah Leah Whitson, HRW's Middle East director.

Amnesty International cautiously welcomed the decision but said the kingdom was moving much too slowly on women's rights.

"It is a welcome, albeit limited, step along the long road towards gender equality in Saudi Arabia," said Philip Luther, Amnesty's deputy director for the Middle East and North Africa.

"It is, however, much overdue and does not go nearly far enough."