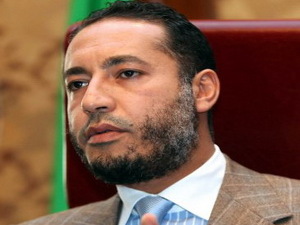 The new Libyan authorities requested the notice against Saadi, believed to be in Niger, "for allegedly misappropriating properties through force and armed intimidation when he headed the Libyan Football Federation," Interpol said in a statement.

Saadi, 38, was last seen in Niger and the red notice calls particularly on countries in the region to help locate and arrest him "with a view to returning him to Libya where an arrest warrant for him has been issued," Interpol said.

"As the commander of military units allegedly involved in the repression of demonstrations by civilians during Libya's uprising, Saadi Gadhafi is also subject to a United Nations travel ban and assets freeze," it said.

Niger's government said on September 16 that it would not send Saadi back to Libya, but could hand him over to another jurisdiction.

"With regard to (our) international obligations, we cannot send someone back there where he has no chance of receiving a fair trial and where he could face the death penalty," government spokesman Marou Amadou said.

"On the other hand, if this gentleman or any other person is wanted by an independent court ... which has universal competence over the crimes for which he is pursued, Niger will do its duty," he added.

Saadi, the third of Gadhafi's seven sons, renounced a football career in Italy in 2004 to join the army, where he led an elite unit.

He arrived in Niger, one of the west African countries that benefited the most from Gadhafi's largesse, earlier this month in a convoy alongside other members of the toppled regime.

Niger has confirmed it has 32 Gadhafi loyalists on its soil, including three generals, saying it allowed them entry for "humanitarian reasons.”

It has insisted that Gadhafi himself is not on its territory and declared that it will comply with international agreements should wanted Libyans cross into its borders.