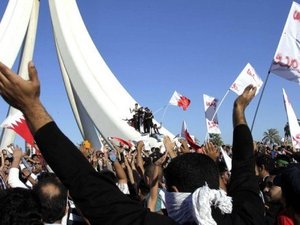 A Bahraini special court sentenced Thursday a protester to death and another to life in jail after convicting them of killing a policeman, BNA state news agency said.

The same court sentenced 20 Shiite medics to between five and 15 years in prison for their roles in a Shiite-led month-long protest which authorities quashed in mid-March.

Ali Yusof al-Taweel was sentenced to death and Ali Mahdi to life in prison for killing policeman Ahmed al-Mreyssi in the Shiite area of Sitra, south of Manama, during unrest that followed the quashing of a Shiite-led month-long protest, BNA said quoting military general prosecutor Yusof Flaifel.

Thirteen medics were sentenced to 15 years in jail, two others to 10 years, and five to five years, including several women, he added.

The medics all worked at the Salmaniya Medical Complex in Manama, which was stormed by security forces after they drove protesters on March 16 out of the nearby Pearl Square -- the focal point of protests inspired by uprisings that have swept the Arab world.

They were also accused of "inciting hatred to the regime and insulting it, instigating hatred against another sect and obstructing the implementation of law, destroying public property and taking part in gatherings aimed at jeopardizing the general security and committing crimes," BNA said.

"All these acts were done with a terrorist aim," it added.