No Deal in U.N. Security Council on Syria Resolution 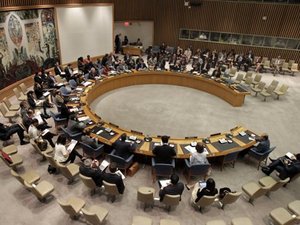 The U.N. Security Council concluded talks on Syria Wednesday without an agreement on a new resolution, after Russia slammed Europe's effort to threaten sanctions against Damascus.

The 15-member Council discussed rival draft resolutions on the Syria crisis drawn up by France, Britain, Germany and Portugal on one side and Russia on the other.

The Europeans have proposed a new resolution in which they drop demands for immediate sanctions but want to threaten President Bashar Assad with action if he does not end his deadly crackdown on opposition protests.

Russia opposes any hint of sanctions and the latest version of its draft resolution seeks to condemn violence by all sides in Syria.

Germany's U.N. envoy, Peter Wittig, said after the talks that all sides were still committed to delivering a "strong and unified message" to Assad's regime.

"The discussion was a good one," Wittig told reporters.

"We still hope that... we can get a strong and unified message of the council that the Syrian regime has to stop violence and engage in dialogue," he said.

"We aspire to an early vote because the situation is urgent," he said, adding that discussions would continue on Thursday.

Russia and China have accused NATO of using U.N. resolutions on Libya to force out Moammarr Gadhafi and say they fear new military action in Syria.

"Let's face it, we have heard statements in various capitals describing what is legitimate and what is not, and we think that this line of thinking and speaking is encouraging violence in Syria," Churkin told reporters.

He said the Russian resolution "is something which if adopted by the council will encourage the political process in Syria and will help stop violence."

The European version, which has U.S. backing, would strongly condemn "the continued grave and systematic human rights violations by the Syrian authorities" and demand "an immediate end to all violence," according to a copy of the draft resolution obtained by Agence France Presse.

The U.N. body "expresses its determination, in the event that Syria has not complied with this resolution, to adopt targeted measures, including sanctions," the draft adds.

The resolution stresses the need for a "Syrian-led political process" to end the crisis and regrets Assad's failure to follow through on promised reforms. It would call for the naming of a special U.N. envoy on Syria.

European diplomats say they want to speed up the debate on the international response to Assad's clampdown which the U.N. says has cost more than 2,700 lives.

Russia and China have threatened to veto any sanctions resolution brought to the 15-nation council, which has so far only agreed on one statement on the crackdown since mid-March. Brazil, India and South Africa have also expressed opposition.

In Washington, Clinton's spokeswoman Victoria Nuland said the United States was working with its EU partners on the resolution, which she said should have "consequences" for the Syrian regime without actually mentioning sanctions.

When asked if her calls for "consequences" meant sanctions, Nuland replied: "tightening .... The economic and political noose on the Syrian regime."