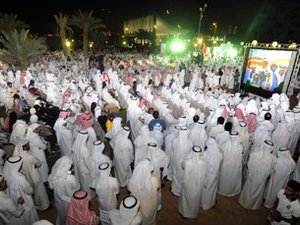 The public prosecutor in OPEC member Kuwait has expanded an unprecedented probe into the bank accounts of several MPs suspected of receiving illegal deposits, local media reported on Thursday.

Citing unnamed sources, al-Jarida daily said the bank accounts of four more MPs were referred to the public prosecution, raising the number of lawmakers under investigation to 14.

The public prosecutor launched the probe two weeks ago after two banks reported large suspicious amounts being deposited into the bank accounts of a number of MPs.

Al-Jarida and other local media expected the number of MPs under suspicion to rise to around 20 in the 50-member parliament.

Some local media even published the names of MPs they said were under investigation, suggesting that all are pro-government MPs.

Leading opposition figure MP Ahmad al-Saadun last week estimated the illegal deposits at $350 million, while the opposition suggested the money related to government efforts to buy the loyalty of MPs in crucial votes.

Opposition activists have organized several protests to press for the dissolution of parliament and the dismissal of Prime Minister Sheikh Nasser Mohammad al-Ahmad al-Sabah, a nephew of the ruler.

Two opposition groups have announced their intention to file to question the premier in parliament over the government's alleged failure to stop widespread corruption.

Thanks to high oil prices, OPEC's third-largest producer has posted a budget surplus in each of the past 12 years. Its foreign investments currently top $300 billion, the largest ever.

Corruption has been on the rise in the oil-rich Gulf state which amassed more than $200 billion of budget surpluses over the past 12 fiscal years, and is headed for another year with huge windfall.

Between 2003 and 2009, the emirate slipped 31 places to 66th position on the Berlin-based Transparency International Corruption Perceptions Index among 178 nations.

In 2010, however, it improved 12 places to the 54th position but still came last among the six-nation energy-rich Gulf Cooperation Council (GCC), behind Saudi Arabia.