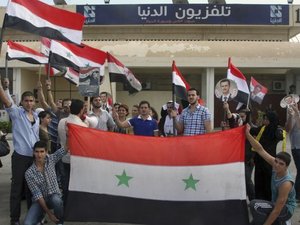 Pro-regime demonstrators on Thursday tried to attack the U.S. ambassador to Syria, an opposition leader said, as Damascus accused Washington of inciting "armed groups" into violence against its army.

The angry mob of nearly 100 Syrians tried to storm an office in the capital where the American ambassador, Robert Ford, had just arrived to meet opposition figure Hassan Abdelazim, the latter said.

"They were protesting in the street and at the entrance to the building. They tried to break down the door of my office, but didn't succeed," Abdelazim told AFP.

"As soon as the ambassador came in at around 11:00 am (0800 GMT), we heard a noise outside and hostile slogans being chanted. The demonstrators tried to attack the office," he added.

Ambassador Ford was holed up inside the office for two hours before security forces arrived and he could return safely to the U.S. embassy, said Abdelazim.

The U.S. embassy confirmed his return in a brief statement to AFP, saying: "He is back and he is fine."

The incident came as the regime of embattled President Bashar Assad accused the United States of inciting "armed groups" into acts of violence targeting its military.

"The words of the State Department spokesman, describing these terrorist acts as natural, are irresponsible and likely to encourage acts of terrorism and chaos in order to serve foreign goals against the interests of Syrians.

"Syria condemns strongly the U.S. statements and affirms its determination to preserve its security and stability, to defend its citizens and to oppose all attempts to interfere in its internal affairs," said the statement.

Answering a reporter's question in Washington on Monday, Toner it came as no surprise that some arms are being sent to Syria's opposition.

"I would say that the opposition’s shown extraordinary restraint in the face of the regime’s brutality and demanding their rights through peaceful unarmed demonstrations," he added.

"It goes without saying that the longer the regime continues to repress, kill, and jail these peaceful activists, the more likely that this peaceful movement’s going to become violent."

"So think what you're saying is, unfortunately, a natural development."

Angry mobs had stormed the American and French embassies in Damascus on July 11 after the two envoys visited the central city of Hama, a flashpoint for protests against Assad's regime.

On September 6, Ford strongly criticized Assad's regime in a statement posted on Facebook, denouncing in particular justifications for the violent crackdown against demonstrators.

The French envoy, Eric Chevallier, said he was the target of a similar attack on Saturday, when a crowd hurled stones and eggs at him after he met Greek Orthodox Patriarch Ignace IV in Damascus.

"The Shabiha (a pro-regime militia), some of whom had metal bars in their hands, and women threw eggs and stones in my direction and in the direction of my team, and looked threateningly at us while we were returning to our two cars," Chevallier told AFP.

Since mid-March, Syria has been shaken by an unprecedented pro-democracy protest movement that the Assad regime has sought to crush using deadly force.

More than 2,700 people have been killed in the unrest, according to the United Nations.

no nedd to be sorry :)
it is the Assad coward militia.

No worries, hopeful idiots. USS Cole (remember May 7, idiots) is on its way. m3alla2in bi 7bel el hawa, Hey idiots, your party and Party are both over. Face the fact and stop kidding yourselves, idiots.

of course, zionists are never sorry for their retarded remarks and genocidal actions.

Are those "shabbiha" too? Btw, the French envoy got a taste of eggs and tomatoes, no stones.

Again "jabalamel" doesn't miss a chance to show his hypocrisy and of course retardation.

This is the least that mutual lovers do. What do you expect more from a reciprocating love? As our famous bozo Dr. Falso once said when Jumblat insulted him: darb al 7abib metl akl el zbib

It took two hours for security forces to arrive? In Syria? Who are they kidding. This was staged by ASSad. What a childish way to have a tantrum against the US when it is he who is doing all the murdering.

Now the US is trembling.
First Iran threatens to send its navy to the American waters and now the Syrian regime's "heroes" surround and pelt the American ambassador with rocks and eggs!
What adds to the fear is all these commentators on naharnet who know all what is going on and are waiting for the D day to pounce on all the "Zionists" and the " Imperialists" and turn this world into an "Islamic republic" paradise.

ALL the Arab leaders do not have any dignity and show inferiority to the racist white man, including those few leaders like Assad who are not coward puppets of the US. Since the Zionist occupied US government does not allow the Syrian Ambassador in Washington to travel outside the embassy, why doesn't the Syrian government do the same with the Zionist prostitute Ambassador in Damascus? ( BUT, I am in no way condoning the lousy Syrian government actions against the opposition)

Oh WOW! The picture shows at least 15 supporters of the regime!! Are there more???

The restriction was imposed in response to travel restrictions placed on US diplomats by Syrian authorities.
In July, Damascus began requiring US diplomats to get approval before travelling outside the Syrian capital.