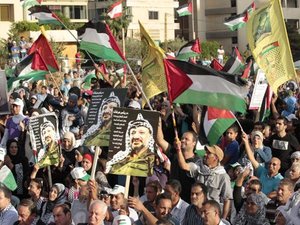 The Palestinians have secured eight Security Council yes votes for their U.N. membership bid, just one short of the nine they need, the Palestinian foreign minister said on Thursday.

Speaking to reporters in Ramallah, Riyad al-Malki said he had received assurances from two additional nations -- Nigeria and Gabon -- that they would vote in favor of the Palestinian bid for full state membership at the U.N.

"We have eight states that will vote for Palestine in the Security Council," he said. "We are working hard to have a ninth and a tenth."

Malki said the Palestinians have assurances of "yes" votes from Lebanon, Russia, China, India, South Africa and Brazil, in addition to the new confirmations from Nigeria and Gabon.

"We are working on Bosnia, Colombia and Portugal," he added, saying he was scheduled to visit Bosnia shortly, and Palestinian President Mahmoud Abbas will make stops in Colombia, Portugal, Honduras and the Dominican Republic in October.

Abbas will also deliver an address in Strasbourg on October 6, he said.

The Palestinians need to secure at least nine Security Council votes in favor of their membership bid for it to be approved and advanced to the General Assembly.

Even with the requisite nine votes, the United States has pledged to use its veto to block the request, but the Palestinians hope they can at least claim a diplomatic victory by securing a majority in the Security Council.

Abbas submitted the bid on Friday, shortly before he delivered a historic address to the General Assembly, urging their support for the request.

After closed-door debate on Monday, the Security Council on Wednesday referred the request to a committee set to meet on Friday.

The bid has attracted criticism from Washington and divided the membership of the European Union, raising the prospect that the Security Council might seek to delay a vote altogether to avoid embarrassing its members.

But Malki said the Palestinians would not accept any delay "for political reasons."

U.S. and EU representatives sought to head off the bid before it was submitted to the United Nations, trying to put together a proposal for new peace talks that would convince the Palestinians to drop their request.

Instead, they announced their new proposal shortly after the request was submitted, calling for talks to resume within a month with the goal of achieving a deal before the end of 2012.

Negotiations have been on hold for just over a year, grinding to a halt shortly after they began over the issue of Israeli settlement construction.

The Palestinians say they will not hold talks while Israel builds on land they want for their future state, but Israel says negotiations should restart without preconditions, and declined to renew a 10-month partial settlement freeze that expired shortly after the talks began last year.

Both sides have responded cautiously to the Quartet proposal, with the Israelis saying they are studying the offer and the Palestinians emphasizing that they will not hold talks without a settlement freeze.

Abbas did the most courageous step the Palestinians could do at this stage.
if the US wants to veto, then let it do it, and it will lose all credibility in the region.