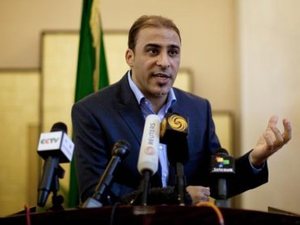 "Misrata fighters contacted us and gave us the information that Moussa Ibrahim has been captured," said Mustafa bin Dardef, of the National Transitional Council's Zintan Brigade.

Another commander, Mohammed al-Marimi, said: "Mussa Ibrahim was captured while driving outside Sirte by fighters from Misrata."

He said there were reports that Ibrahim was dressed as a woman, but that he could not immediately confirm that.

Ibrahim had been the public voice of the Gadhafi regime until NTC fighters overran Tripoli on August 23.

Despite fleeing the capital along with the deposed despot, he has continued to issue statements through Syrian-based Arrai television from an unknown location, although not as frequently.

On Friday, Ibrahim had appealed for resolve against "agents and traitors," denounced what he called "genocide" by NATO and its "Libyan agents," and criticized the world community for "inaction."

Commander bin Dardef gave no other details about his reported capture, choosing to concentrate on the battle for Sirte.

"The Misrata Military Council and our representatives will meet later today to discuss the next strategy for capturing Sirte," bin Dardef told AFP.