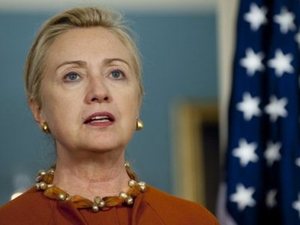 U.S. Secretary of State Hillary Clinton on Thursday demanded that the Syrian government do everything possible to protect U.S. diplomats.

"We immediately raised this incident with the Syrian government," Clinton told reporters following an attack on the U.S. ambassador to Syria, Robert Ford.

"We are demanding that they take every possible step to protect our diplomats according to their obligations under international law," she said.

Hey, I have an idea! Why not bomb Syria to protect the world from its eggs of mass destruction?