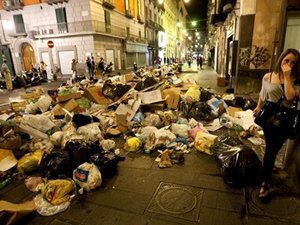 With six million tons of trash piled up in temporary storage sites in the Naples area, the European Commission is giving Italy an ultimatum -- clean up your act or face a major fine.

"The commission is concerned because so little measures have been taken in the 18 months since the court's original decision," said environmental affairs spokesman Joe Hennon.

"We are giving Italy a final warning before we may have to go to back to court, and the next time we go to court there could be fines imposed," he said, adding that Italian authorities have two months to reply.

The majority of waste installations foreseen by Italian authorities have yet to be built while timetables for taking action are "too long," Hennon said.

The Campania region has struggled with a waste crisis for years, prompting the commission to launch legal action in 2007. The EU Court of Justice issued two orders, in March and December 2010, but Naples is still mired in trash.

The waste mountain is partly blamed on the Naples mafia, the Camorra, suspected of cashing in on a wide range of activities from drug trafficking to waste management and real estate.

Fines imposed by the Luxembourg court vary and depend on the size of the economy of the country facing sanctions as well as the length and magnitude of the infringement.

"The waste crises in Naples and surrounding areas are a particular concern, endangering human health and the environment for several years already," the commission said in a statement.

Despite some improvements, the Campania region still lacks an adequate network of waste management installations, with problems in trash collection and disposal, it said.