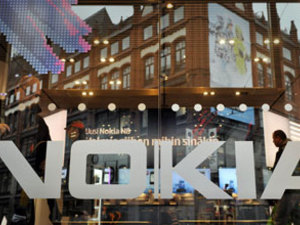 Mobile phone giant Nokia said Thursday it was slashing 3,500 jobs in Romania, Germany and the United States, just months after announcing 4,000 job cuts it said would be the last for the foreseeable future.

These cuts are in addition to the 4,000 job cuts and 3,000 outsourced jobs the company announced in April as part of a massive restructuring effort.

"If you think about where the markets are, the growth markets are in Asia, and it makes sense to manufacture a product close to the customer," he said.

But in Cluj, employees and authorities were in shock to discover the plant, which employs 1,900 people, would shut its doors by the end of the year.

"We are very unhappy, we were not expecting this announcement and the unions have accepted the decision without batting an eye," 35-year-old plant worker I.M. told AFP, requesting to remain anonymous.

Nokia is the second-largest exporter from Romania.

Its departure is a blow to the national economy and has some Romanian lawmakers wondering whether they can demand Nokia pay back some 15 million in infrastructure investments made for the company, as Germany did when Nokia closed a plant in Bochum in 2008.

Nokia also hinted at more job cuts next year, saying that it would review the long-term role of certain factories in Salo, Finland as well as plants in Hungary and Mexico.

The company said it expected to have more details "into the possible headcount impacts" at these sites in 2012.

The specter of more job losses in Finland, which was already bracing for around 1,400 cuts and is still reeling from periodic job cuts over the last few years, sent shockwaves through engineering unions.

The head of the Union of Professional Engineers, Pertti Porokari, said Nokia had to come up with a better long-term policy than simply laying off employees every once in a while.

"People cannot remain motivated and productive in a continuing atmosphere of fear," he said in a statement, adding that he hoped the cuts in production wouldn't weaken Nokia's position "even further."

When chief executive Stephen Elop announced in April that his radical new restructuring effort would result in 4,000 job cuts around the world, he said this was the "full plan for as far as we can see into the future."

That Nokia now, just five months later, is announcing another massive round of job cuts shows just how quickly the market is changing, Rauhala said.

"A lot of these factors have been a reality for some time, but it takes a while for the situation to heat up," he said.

Rauhala said Nokia, which is still the world's largest mobile phone maker, is operating in a rapidly changing landscape, marked by Motorola's leap into the Google camp by agreeing to make only Android phones and the rise of small local manufacturers aggressively claiming market share.

In addition to the job cuts, Nokia will next month transfer around 3,000 of its Symbian developers to U.S.-based global firm Accenture.

At the end of December 2010, before Elop's restructuring announcement, Nokia employed around 60,000 people not including employees for Nokia Siemens Networks or NAVTEQ.

The former undisputed world leader saw its market share fall to around 23 percent in the second quarter of this year, according to analysts, compared with a peak of 40 percent in the first half of 2008.