Saleh Says he Won’t Step Down if Former Allies Run 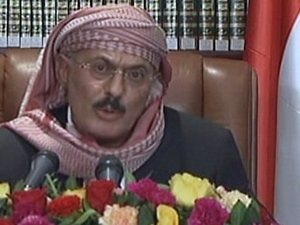 Yemeni President Ali Abdullah Saleh said Thursday he would not step down if his former allies-turned-rivals are allowed to run in elections -- a potential setback to hopes for a peaceful transition.

The embattled leader told Time and The Washington Post that a power transfer deal crafted by his Gulf neighbors calls for "all the elements" causing tension in Yemen to be removed -- and warned of a civil war if that did not occur.

He was referring to dissident General Ali Mohsen al-Ahmar, who has joined ranks with a populist uprising that began early this year, and the powerful Ahmar tribe, not related to the general.

When asked if he would transfer power if the general and the Ahmars still had influence, Saleh responded, "No."

"If we transfer power and they are there, this will mean that we have given in to a coup," Saleh said in his first interview since returning home Friday from a stay in Saudi Arabia to recover from injuries sustained during a June attack on his palace.

"If we transfer power, and they are in their positions, and they are still decision makers, this will be very dangerous. This will lead to civil war."

Time and the Post said Saleh's face was marked by "deep scars" and that he had trouble hearing. Only a distant photograph of the longtime leader was published with the articles, with no close-ups.

Saleh was wearing gold-colored gloves such as those worn by burn victims to prevent scarring.

The Yemeni president said that Mohsen and the Ahmar tribe, along with the opposition, may have played a role in the assassination attempt against him, and would face prosecution if they were found guilty.

His government was awaiting the results of a U.S. investigation into the attack that Saleh said was due to be completed by the end of this month.

But asked about the violent repression his security forces have used against people demanding an end to his 33-year-old rule, Saleh blamed the dissident general and the Ahmar clan.

"They assassinate protesters from behind so they can blame the state," he said.

Saleh, who is under international pressure to relinquish power and allow new elections, sparked a fresh wave of violence with his return in which scores have been killed.

The 69-year-old president has repeatedly refused to sign a deal brokered by the Gulf Cooperation Council (GCC) under which he would hand over to Vice President Abdrabuh Mansur Hadi in return for immunity from prosecution.

In the interview, Saleh insisted he remained committed to the GCC initiative, denying claims he was seeking delays to hold on to power and putting the blame on the opposition's inflexibility.

"This is a misunderstanding. We are willing within the next hours and next days to sign it, if the JMP comes closer" to reaching an agreement, Saleh said about the Joint Meetings Party opposition coalition.