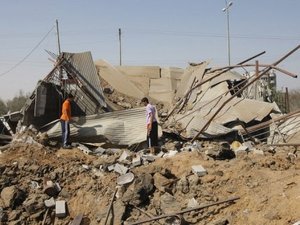 The Israeli air force launched a raid over the Gaza Strip after a rocket was fired from the Palestinian territory towards southern Israel Thursday, a military spokesman said.

The rocket fired from Gaza landed in an abandoned building in Israel's Shaar Hanegev area, the spokesman said.

Hours later, an Israeli air force plane fired a missile at a Hamas target in the Maghazi refugee camp in central Gaza, according to residents of the camp.

The army spokesman confirmed the raid to Agence France Presse, saying it was "in retaliation" for the earlier rocket fire.

There were no reports of casualties on either side.

Last month, 27 Palestinians and an Israeli were killed as violence flared in and around the Gaza Strip, before the return of a de facto ceasefire.

The latest wave of attacks began on August 18 when eight Israelis, including six civilians, were killed in an attack in the Eilat region of southern Israel, near the Egyptian border.