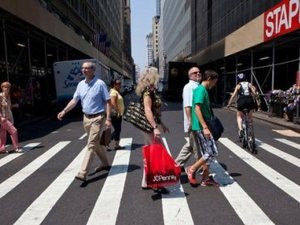 Americans earned less and goods cost more in August, figures from the Commerce Department showed Friday, as incomes dropped for the first time in close to two years.

In another sign of the storm that continues to buffet the U.S. consumer -- long the keystone of the world's largest economy -- personal income decreased by $7.3 billion, around 0.1 percent, for the first drop since October 2009.

"It seems very unlikely that consumers can lead the economy to a faster recovery pace," economists John Ryding and Conrad DeQuadros of RDQ Economics told clients in a briefing note.

The figures ran against the expectations of most economists, who had expected spending, wages and prices to rise moderately.

Amid the higher prices and lower wages, the Commerce Department also reported signs that Americans are eating into their savings to get by.

"The decline in the savings rate to the lowest level since the end of 2009 underscores the strain on households given the current jobs environment," said Ryding and DeQuadros.