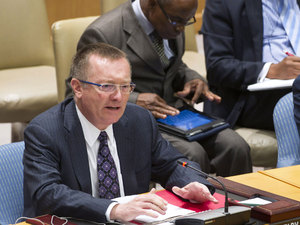 Nepal risks a return to "confrontation and conflict" if its leaders fail to agree on a post-war constitution due next week, a senior U.N. official said Wednesday.

The Himalayan nation has endured prolonged political limbo since the end of a decade-long civil war in 2006 as parties have struggled to complete a draft constitution expected to cement the peace process.

The U.N.'s under secretary general for political affairs Jeffrey Feltman told reporters in Kathmandu that while Nepal faced "risks in terms of opportunities lost (by) not concluding the constitution... there are risks that go beyond simply lost opportunities."

"There are risks of confrontation and conflict," said Feltman, who was on a two-day visit to the country.

Political infighting has seen the ruling coalition threaten to put disputed issues to a vote in the constituent assembly in a bid to publish a draft document by the January 22 deadline.

Opposition parties, led by former Maoist rebels who waged a ten-year insurgency before laying down arms in 2006, responded by shutting down the capital Tuesday and have warned of further strikes if voting goes ahead.

Feltman said he had met with party leaders and urged them "to neither threaten a walk-out nor force a vote, but rather to conclude the process through compromise, flexibility, and inclusivity."

"Time, according to the calendar set by the leaders themselves, is running out... it is essential for political leaders to seize the moment," he said.

Despite extensive discussions since national polls in November 2013 and the appointment of a new prime minister last February, parties have failed to agree on major issues.

A key sticking point concerns internal borders, with the opposition pushing for new provinces to be created along lines that could favor historically marginalized communities such as the "untouchable" Dalit caste and the Madhesi ethnic minority.

Other parties have attacked this model, calling it too divisive and a threat to national unity.

An estimated 16,000 people died in the "people's war" fought by the Maoists against the state before the rebels signed a peace deal, paving the way for constituent assembly polls two years later.