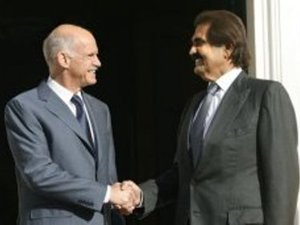 "We have built a very strong bond of mutual respect, and we Greeks are especially pleased that this bond leads to investments in our country," Papandreou said following the meeting with the Emir of Qatar.

Greece and Qatar signed an agreement on the sidelines of the meeting allowing the latter to provide an inflow of capital into Halkidiki Mining Company "Hellenic Gold".

The 1.2-billion-euro ($1.6 billion) investment will create 1,500 new jobs upon its completion, the Athens News Agency reported.

Qatar has shown in the past interest in real-estate projects in Greece and has eyed the 550-hectare former Athens airport at Hellenikon that is up for grabs under a five-year privatization drive worth 50 billion Euros the government is pushing.

Moreover, a capital increase of 500 million Euros from the Qatari fund Paramount was announced on August 29 during the merger between Greece's second and third-largest lenders, Eurobank and Alpha Bank.