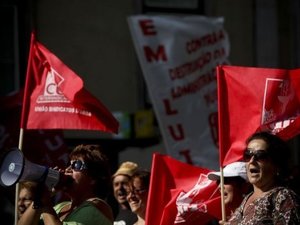 Thousands demonstrated in Portugal Saturday against the government's austerity measures amid projections that the economic situation is far worse than expected.

Government and private sector workers rallied in Lisbon and Porto, following a call by the country's largest trade union federation to speak out against policies it says have devastated "jobs, workers, pensions and social rights."

"No to price rises" and "No to the destruction of health care", read banners hoisted by demonstrators marching through central Lisbon.

Rally organizers, who said they had charted dozens of buses to transport protestors from around the country, did not immediately provide an estimate of the turnout.

In April, Portugal became the third Eurozone country after Greece and Ireland to request an emergency bailout from the European Union and the International Monetary Fund to deal with its mountain of debt.

In exchange for the 78 billion euro ($106 billion) the country agreed to impose reforms demanded by its creditors, including tough budget cutting measures.

Prime Minister Pedro Passos Coelho's right-of-centre government, which unseated the Socialists in a June vote, has promised further austerity, which is favored the EU and IMF, but loathed by those on the streets Saturday.

"No to the IMF's interference," read another banner, which included the line: "We are saying no to this program of aggression."

Last month, Portugal unveiled plans for a slimmed-down central administration, that included the axing of 1,700 managerial posts from the state administration and 137 public companies.

Demonstrator Rafael Lourno, who works at the finance ministry, told Agence France Presse the public sector job cuts and privatization plans government claims are needed to manage its debt amounted to "a frontal assault against the rights of workers."

While holding a megaphone, Lourno pointed to specifically to a plan to reduce severance pay to 20 days per year worked, down from 30 days.

"I am fighting not only for my rights but also for the rights of my children and grand-children," said a retiree, who came to Lisbon on one of the chartered buses.

Earlier this week, Portugal said its economy could contract by a more than anticipated 2.5 percent of gross domestic product next year because of a far gloomier global economic outlook.

In a statement issued ahead of the rally, the CGTP argued that it is the government's policy decisions that have hampered economic recovery.

But parliamentary affairs minister Miguel Relvas said Saturday that the austerity "track" Portugal is on "is not reversible."

"We are going to continue to ask for sacrifices from the Portuguese people," he said.

The government said Friday that it will announce by mid-October a new set of austerity measures for the 2012 budget.

"The people are quite disheartened. They no longer believe in anything and have given up," a demonstrator in his thirties told local TV as he boarded a Lisbon-bound bus earlier Saturday.

"But they are starting to see the need to demonstrate against the policies of the government."