Kerry to Co-host Talks on Islamic State in London 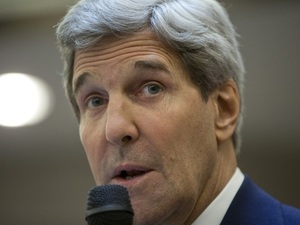 U.S. Secretary of State John Kerry will travel to London on Thursday to host with his British counterpart a meeting of members of the coalition against the Islamic State group.

Kerry's spokeswoman Jen Psaki said the one-day talks with foreign ministers from about 20 countries, including Arab states, would focus on "our shared efforts to degrade and defeat ISIL," an acronym by which the group is known.

A British official separately confirmed the meeting will take place at Lancaster House in central London, two weeks after deadly attacks in Paris by three gunmen claiming to act on behalf of al-Qaida and the IS group occupying parts of Iraq and Syria.

Discussions will focus on five areas -- foreign fighters, the military campaign against IS targets, its sources of finances, strategic communications and humanitarian assistance, the British official said.

He will then travel to the World Economic Forum in Davos taking place Thursday through Saturday to meet with global leaders, as well as business and civil society representatives.

The top U.S. diplomat will deliver remarks at WEF's annual meeting on Friday.