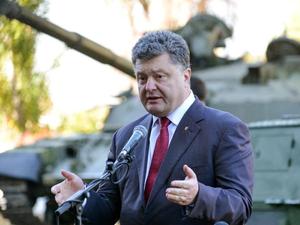 Ukraine on Tuesday accused Russian forces of attacking its soldiers after crossing over into the ex-Soviet state's war-wrecked separatist east in violation of a September truce deal.

The charges -- met with initial silence by Moscow -- should add further tensions to difficult talks in Berlin on Wednesday aimed at stemming a spike in fighting that has already killed 4,800 people and driven a million from their homes.

Ukrainian President Petro Poroshenko, on a visit to Davos for the World Economic Forum, planned to cut short his trip due to the "worsening situation" in his country's rebel-held east, his spokesman Svyatoslav Tsegolko said.

"In violation of all prior agreements, Ukrainian military units were attacked in the north (of the war zone) by regular units of the Russian armed forces," Ukrainian military spokesman Andriy Lysenko told a hastily convened press conference in Kiev.

The claim came only hours after Moscow called "absolute nonsense" an allegation by Kiev that about 700 new Russian soldiers had crossed over into eastern Ukraine to help the insurgents' latest advance on government troops.

Blasts of incoming and outgoing artillery echoed all night across the rebels' main stronghold of Donetsk -- a once bustling industrial hub now the crucible of one of Europe's worst humanitarian and diplomatic crises since the Cold War.

Rebel city administration member Ivan Prikhodko said two civilians were killed and eight were seriously wounded when a shell hit a bus stop on the northwestern edge of town.

"The bus stop itself and a store nearby have been levelled," Prikhodko told AFP by telephone.

Two top Western diplomats in Kiev said they believed the pro-Russian militias had made significant progress on the ground in recent days.

One of them added on condition of anonymity that the gunmen appear to be trying to undermine European peace efforts in order to win more ground before a final partition agreement is reached.

The flare-up coincided with the warring sides' attempt to establish a demarcation line between their armies that would define the confines of rebel-controlled lands.

Moscow insists that the separatists have the right to a ruined airport near the rebels' main stronghold that the remnants of a Ukrainian force have been holding on to for months.

Ukraine has also set in motion a previously approved fourth wave of military call-ups since the start of hostilities in mid-April.

The 50,000 new volunteers and reservists will be mostly deployed in the war zone in stages stretching over three months. Their call-up also reflects Ukraine's increasingly frantic attempts to defend itself against what it views as Russian "aggression".

The blame game between Moscow and Kiev is being watched by European leaders who hope to see a quick end to a nine-month conflict that has plunged East-West relations into crisis and sparked a damaging sanctions war.

The Kremlin said the resumption of what Kiev now says is full-scale war means no peace summit between the neighbours' presidents and the leaders of Germany and France was likely any time soon.

But Germany said that the four countries' foreign ministers would still meet in Berlin on Wednesday to see if they could somehow find a compromise that could stem the violence.

"The chief aim now is to prevent a further deterioration of the military conflict and a renewed political escalation between Kiev and Moscow," German Foreign Minister Frank-Walter Steinmeier said in a statement. "This is worth every effort."

The most bitter fighting focused on the international airport that Ukraine spent nearly a billion dollars rebuilding for the Euro 2012 football championship matches staged in Donetsk.

The rebel militias -- armed with heavy artillery guns and Grad systems that fire up to 40 rockets in less than a minute -- have pulverized the once gleaming structure.

They reportedly captured the airport on Monday after a weekend assault.

Ukraine's army claimed to be back in control by Tuesday but also admitted that the rebels had captured eight of its troops.

"There was a battle. There were deadly losses. And eight people were captured," Poroshenko's defense adviser Yuriy Biruykov wrote on Facebook.

Ukraine's defense ministry also said Tuesday that rebels had blown up the runway at the airport and reinforcements had been sent.