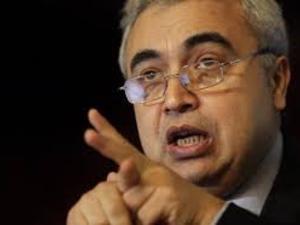 The chief economist of the International Energy Agency said Friday there would be no "significant" changes to Saudi oil policy following the death of King Abdullah.

"With the death of the king, with the changes (in government), I do not expect any significant change in the oil policy of Saudi Arabia and I expect and hope that they will continue to be a stabilization factor in the oil markets," Fatih Birol told Agence France Presse on the sidelines of the World Economic Forum in Davos.

"I hope they will continue to contribute to the stability of the oil markets ... especially in these days where we are going through difficult days," he added.

The elderly King Abdullah died earlier Friday and was replaced by his half-brother Salman as the absolute ruler of the world's top oil exporter and the spiritual home of Islam.

As the top producer in the Organization of the Petroleum Exporting Countries, Saudi Arabia has been the driving force behind the cartel's refusal to slash output to support oil prices, which have fallen by more than 50 percent since June.

Oil prices surged Friday following Abdullah's death, amid uncertainty over whether the new king would maintain that policy.