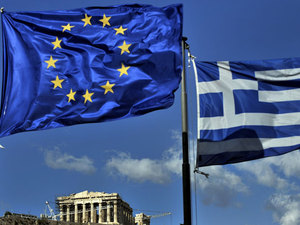 An under-pressure Eurozone got back to work on Greece on Monday, trying to unblock hold-ups to promised bailout funds after international markets tumbled on the latest doubts.

Despite an announcement from Athens it would fail to meet this year's deficit targets, Greece's finance minister Evengelos Venizelos said his country would not be made a "scapegoat" for wider debt troubles as he went into talks with his 16 euro-area counterparts.

Venizelos, also deputy premier, on Sunday announced new budget cuts for 2012 in a bid to satisfy international auditors just back in Athens after a month's absence.

Their assessment will determine whether Greece can secure eight billion Euros in loans needed to pay next month's bill that were blocked by Eurozone partners and the IMF.

"Greece is a country with structural difficulties. But Greece is not the scapegoat of the euro area," Venizelos said on arriving for the two-day talks, citing a cumulative recession over three years that has seen its economy shed 12 percent of its value.

But EU Economic Affairs Commissioner Olli Rehn said the so-called "troika" of inspectors from the European Commission, the European Central Bank and the International Monetary Fund would need time to complete their assessment of the latest Greek budgetary vows.

That may not be ready in time for a decision here on paying out the sixth tranche of last year's 110-billion-euro rescue.

Concerns range from doubts about Greece meeting its latest commitments, given broken past promises and its now 350-billion-plus debt pile, to potential difficulties in securing the necessary parliamentary majority for their full implementation next year.

While that is the key hurdle to a resumption of the flow of bailout cash the United States and other major economies want, to avoid a default which could trigger widespread recession, there are others if Greece is to receive a second, 160-billion-euro bailout promised in July.

Three of the 17 Eurozone states -- Malta, the Netherlands and Slovakia -- have still to vote through changes that would allow an existing rescue fund to loan out its full 440 billion of government guarantees.

However, rising disquiet in Slovakia -- which already sat out last year's 110-billion Greek bailout -- means its governing, four-party coalition may not even vote before a summit of European Union leaders in Brussels on October 17 and 18.

German Finance Minister Wolfgang Schaeuble put pressure on Slovakia to carry through the commitment it made to partners at a July 21 Eurozone summit, reminding his colleague that Bratislava "committed to implementing that as soon as possible."

He called on Slovakian lawmakers to "take their responsibility and know that they not only decide for us but for all in Europe."

Finland has also posed problems, having struck its own deal for Greece to lodge cash collateral in Helsinki before it would pay out its share -- creating a running sore for other gold-plated Eurozone economies.

Asked if a deal at last would be found here, Finland's Jutta Urpilainen said: "Unfortunately I can't say yes."

Global pressure is on to resolve the problems before G20 leaders meet in Cannes, France, on November 3-4, after a warm-up gathering of finance ministers in Paris on October 14-15.

The euro ministers were also to discuss a U.S.-led clamor for the EFSF's legal status to be changed, with a series of options on the table including a plan enabling it to morph into a bank.

That would give the fund the power to leverage funds from the European Central Bank (ECB) in the event of a crisis -- what Rehn said would be a way to "get more out of it and make it more effective as a financial firewall."

Luxembourg's Luc Frieden, though, said any decision on "leveraging," should be delayed. "Let us first implement the decisions taken on July 21," Frieden said. "Once that is done, we have to look at other issues including strong capitalized banks."

With stocks down and the euro hitting its lowest point since January during the day, British finance minister George Osborne urged the Eurozone to end the uncertainty.