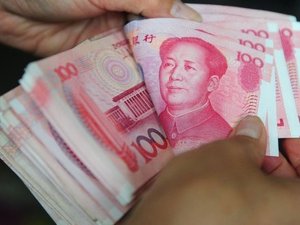 China said Tuesday it "firmly opposed" a U.S. Senate bill aimed at punishing Beijing for its alleged currency manipulation, which is expected to make its final passage later this week.

The bill -- which comes 13 months ahead of U.S. elections in which high unemployment is likely to be an issue -- sets the stage for retaliatory duties on Chinese goods if Beijing is found to keep its currency artificially cheap.

"China firmly opposes this," he added in a statement.

The legislation -- backed by both Democrats and Republicans in Congress, while opposed by Beijing and U.S. business groups -- cleared a procedural hurdle by a 79-19 vote on Monday, with final passage expected this week.

"The longer we wait, the weaker America gets," warned Democratic Senator Chuck Schumer, who dismissed talk of escalating Sino-US tensions and declared: "We're already in a trade war."

The United States has accused China of undervaluing its Yuan currency to keep the price of manufactured goods for export artificially low. But China has let the Yuan rise against the dollar as it faces high inflation at home.

China's central bank expressed "regret" at the bill, which would empower U.S. businesses and in some cases labor unions to trigger a US Commerce Department investigation into alleged currency manipulation.

"We think there are many reasons for global imbalances, and the Yuan exchange rate is not the main reason for the Sino-US trade imbalance," it said in a statement.

"The differences in Chinese and US investment and trade structures, in deposit and consumer rates... and the unreasonable global currency system may be even more important elements than the currency exchange."

Ma said China urged the United States to abandon its "protectionism" and "not to politicize trade issues".

He also called on Washington to "create a favorable environment for the development of bilateral economic and trade relations, using concrete actions".

The bill rewrites the law to make it harder for the U.S. Treasury Department to stop short of declaring China a currency manipulator, and makes manipulation punishable with duties on an offending country's goods.

It also seeks to restrict the White House's ability to overrule the imposition of sanctions.

Shen Danyang said the Yuan exchange rate was not to blame for the current trade imbalance between China and the United States.