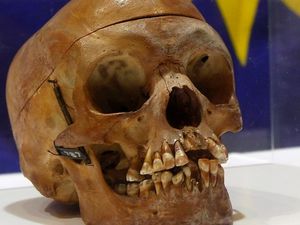 Thousands of Namibia's ethnic Hereros and Namas gave an heroic welcome Tuesday to 20 skulls of their ancestors returned from Germany, where colonial authorities had taken them a century ago.

About 4,000 people stood on the tarmac at the capital Windhoek's international airport, where the plane carrying them home landed at sunrise to ululating women and men shouting battle cries amid banners reading "welcome to our ancestors, our heroes".

At the far end of the runway, two caskets covered with the Namibian flag were taken out of the plane by officers of the Namibia Defense Force, flanked by an honor guard and accompanied by a trumpet salute.

As the caskets were loaded into a military vehicle, a small group of Herero men drew closer, calling to their ancestors and welcoming them home.

"Our people cry tears as our grandmothers and grandfathers are back on their home soil," said Herero chief Kuiama Riruako.

Riruako was part of the 60-member Namibian delegation that flew to Germany at the end of September to receive the skulls at the Charite University hospital in Berlin.

The skulls are among an estimated 300 taken to Germany after a slaughter of indigenous Namibians during an anti-colonial uprising in what was then called South West Africa, which Berlin ruled from 1884 to 1915.

Incensed by German settlers stealing their land, cattle and women, the Herero people launched a revolt in January 1904 with warriors butchering 123 German civilians over several days. The Nama tribe joined the uprising in 1905.

Rounded up in prison camps, captured Namas and Hereros died from malnutrition and severe weather. Dozens were beheaded after their death and their skulls sent to German researchers in Berlin for "scientific" experiments.