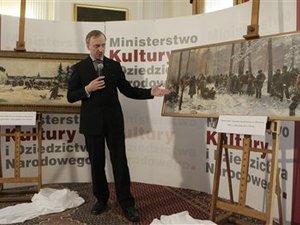 Two Polish paintings that were stolen during World War II and confiscated by U.S. authorities last year were returned to the National Museum in Warsaw on Tuesday.

Polish Culture Minister Bogdan Zdrojewski handed over the pictures to the museum in a ceremony at his ministry.

"I am happy to say that today the paintings return to the place where they had been taken from more than 60 years ago," Zdrojewski said, speaking to museum director Agnieszka Morawinska and reporters.

The masterpiece watercolor "Off to the Hunt" and an oil painting "The Hunt" are by 19th-century artist Julian Falat, known for his hunting and landscape scenes. U.S. authorities handed them over to Polish officials in New York last month.

They were seized last year during an investigation by U.S. Immigration and Customs Enforcement after Polish authorities alerted U.S. authorities in 2006 that both were about to be sold at auction in New York.

They had been missing since 1944. They were presumably stolen by the Nazis, who razed Warsaw to the ground after the fall of the Warsaw Uprising.

Back in Poland, "Off to the Hunt" was put back into its original gilded frame that was left behind at the time of the theft.