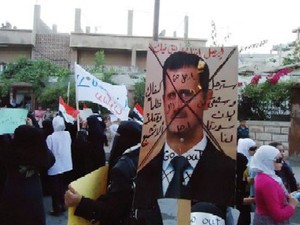 Turkey's Prime Minister Recep Tayyip Erdogan said his government would announce a package of sanctions against neighboring Syria despite a U.N. resolution blocked by Russia and China.

"Unfortunately, the draft prepared in the form of a warning (against Syria) was vetoed during the vote at the U.N. Security Council yesterday," Erdogan was quoted as saying by the Anatolia news agency.

"But this does not constitute an obstacle," he said, adding that "Turkey like some other European Union countries will take steps on this issue."

"We will inevitably impose right now a package of sanctions," he said, speaking on an official visit to South Africa.

Turkey voiced support for the resolution with Erdogan planning to announce sanctions against Damascus during a visit on Sunday to camps in Hatay, near the Syrian border, where thousands of Syrians have taken refuge, according to media reports.

Ankara has expressed frustration with Syrian President Bashar Assad for failing to listen to the people, whose almost daily pro-democracy rallies have been met with violent repression, at a cost of more than 2,600 lives according to the U.N.