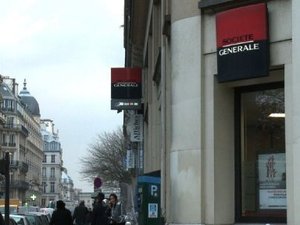 French officials scrambled Wednesday to defend plans to save struggling Franco-Belgian bank Dexia, insisting it is an isolated event that poses no threat to France's own top credit rating.

Dexia, which specializes in lending to local authorities, found it could not access funding on the money markets where the Eurozone debt crisis has seen credit run dry.

To save it from collapse, a French government fund and a state-run bank are preparing to step in to guarantee deposits and take over management of much of its activity.

Coming at a time when the markets fear that many other French lenders are overexposed to risky Greek, Spanish and Italian sovereign debt, the Dexia move has increased fears about the overall stability of France's financial sector.

A string of officials played down the fear and rebuffed a warning from Socialist former Prime Minister Laurent Fabius that France "was caught by the throat" with its prized AAA credit rating put in danger by the bailout.

"I find these suggestions very excessive and, to tell the truth, pretty inaccurate. The states won't be guaranteeing more than they guaranteed a few years ago," central bank governor Christian Noyer said.

Government spokeswoman Valerie Pecresse said Dexia's problems went back as far as 2007 and insisted there was "no connection between Dexia and other French banks."

France and Belgium had previously stepped in to help out Dexia in 2008, when it found itself in difficulty over its exposure to U.S. sub-prime debt.

"The Belgian and French states will put much less money into this operation than the British put into the Royal Bank of Scotland or Barclays," Noyer said, referring to bank bailouts that did not damage London's credit rating.

Finance Minister Francois Baroin confirmed the Caisse de Depots, a state-run long-term investment fund, and the Banque Postale, the banking arm of the French post office, were readying an intervention.

"The board will announce its decision tomorrow," he said. "It's obviously the most serious option."

Baroin also played down the scale of the intervention and added that such guarantees to financial institutions are not accounted for when calculating a government's public deficit.

Belgian Finance Minister Didier Reynders said meanwhile that Belgium might provide guarantees for Dexia worth "several tens of billions of euros," ensuring that bank clients do not lose any money.

In its 2008 Dexia bailout, Belgium put up 90 billion euros to save the bank from collapse in the global financial crisis.

European Affairs Minister Jean Leonetti denied that Dexia's crisis could be the first domino in a chain that would topple more French banks.

"Dexia has had problems from a long time. For the past 20 years there have been management problems. This is a very specific problem that has nothing to do with Greek debt," he said.

With the fall of Lehman Brothers in 2008 still fresh in memory, France had no choice but to bailout Dexia, said Jerome Cahuzac, chairman of the parliamentary finance committee.

"What is about to be proposed should settle questions over Dexia's financing," he said.

ING researcher Mark Harmer noted that with its unraveling, Dexia "becomes Europe’s highest profile resolution case to date before it has a chance to morph into Europe’s Lehman."