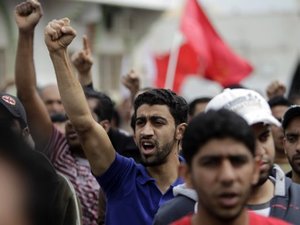 A Bahraini special court on Wednesday sentenced 13 Shiites to five years in jail for trying to set ablaze a police station during democracy protests, the chief military prosecutor said.

The group had been charged with attempting to burn down al-Khamees police station close to Manama's Pearl Square, the focal point of anti-regime protests inspired by the Arab Spring.

The protesters had "prepared Molotov cocktails" and blocked the streets leading to the center with blocks of concrete and garbage containers, but security forces managed to stop them from setting the station on fire, BNA said.

They were also accused of taking part in public gatherings "with intent to commit crimes and breach security," it added.

The condemned would be able to appeal the sentences at a civil court, the military prosecutor said, in line with a pledge by King Hamad.

The National Safety Court, which has a mixed military and civil panel, has in the past four days sentenced more than 100 people to jail for various convictions over the month-long protests.

The quasi-military court has sentenced to death at least five Shiites for killing policemen and many more are still being tried for other alleged offences, among them opposition leaders and medics.

Authorities said in May that 405 detainees had been referred to courts, while 312 were released.