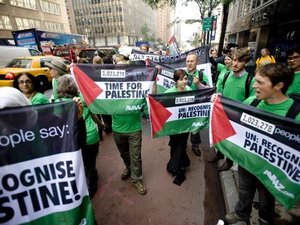 France said Wednesday that it opposed moves by the Palestinian Authority to seek rapid recognition as a full state member of the United Nations cultural organization UNESCO.

"We don't think UNESCO is the appropriate arena," foreign ministry spokesman Bernard Valero said, after Arab members of the world body said they wanted the Palestinians to be promoted from observers to full members.

Palestinian leaders have demanded full recognition as a state by the United Nations Security Council in New York -- in the full knowledge that the United States will veto such a move, in support of its ally Israel.

Now their Arab allies in Paris-Based UNESCO have opened up a second front, hoping to add to the growing trappings of Palestinian statehood.

And UNESCO membership would not only be a diplomatic feather in Palestine's cap -- it would allow it to apply to class its monuments as World Heritage Sites at a time when the heritage of much of the Holy Land is under dispute.

France has tried to ply a middle course in the debate, while insisting it fully supports eventual Palestinian statehood in the framework of a two-state solution that guarantees Israel's security and a viable Palestine.

But Valero said France felt it "was not the time" for the Palestinians to push the UNESCO issue, and insisted that the "priority must be the resumption of negotiations" with Israel on an eventual settlement of the dispute.